According to news reports, the apartment door was vandalized twice since Tuesday with swastikas that were carved into the door. The incident took place in the 400 block of Strathmore Lane in Lafayette.

We are deeply disturbed and concerned about what appears to be the targeting of a Jewish couple with anti-Semitic vandalism. We commend the apartment management company for quickly painting over the graffiti. We encourage the Lafayette Police Department to investigate the incident as a hate crime and to pursue hate crimes charges if the evidence warrants.

There are far too many instances of hate, such as this incident, taking place in Colorado. We are particularly concerned about an increase in anti-Semitic acts, including the vandalism of two synagogues in Colorado Springs this summer. In Colorado alone, ADL monitored 18 acts of anti-Semitism in 2015, 45 in 2016, and if the trend thus far for 2017 continues, we are worried that there will be over 60 incidents by the end of the year. This must not be tolerated. 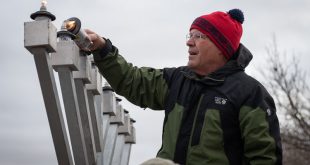