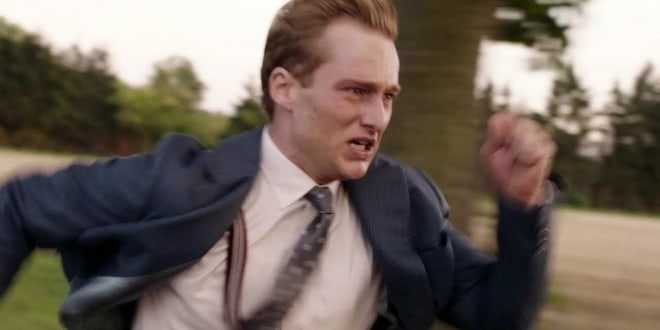 In December, “Labyrinth of Lies” made the Academy Awards short list of foreign films. Germany’s Oscar submission was in the top nine, but did not make the final cut.

Based on true events, the near-miss Oscar-nominee is a post-WW II thriller that exposes Germany’s state of denial following the Holocaust. In this fresh take on Nazi atrocities, a young prosecutor in postwar West Germany investigates a massive conspiracy to cover up the Nazi pasts of prominent public figures.

“Labyrinth of Lies” artfully blends fact with fiction to offer a thought-provoking look at how the lessons of history can be easily lost or forgotten.

One critic observed that the film can be seen as a sort of philosophical sequel to “The Lives of Others,” the German movie about the activities of the Stasi secret police that won the 2007 Oscar for Best Foreign Language Film. Both pictures are about making sense of Germany’s post-Nazi era, and about confronting the past without drowning in a whirlpool of guilt. Casting the blond and blemish-free Aryan poster child Alexander Fehling (“Inglorious Basterds”) in the lead symbolizes the blamelessness of his generation, and makes the burden of shouldering his forefathers’ guilt all the more crushing.

“A chilly, disquieting study of a society in a state of denial until the truth is bared.” -Stephen Holden.” – NY Times “A principled young prosecutor in post-WWII Germany uncovers inconvenient truths about his country’s recent past in this intelligent and arresting fact-based drama that plays like a more streamlined version of the high-minded, blunt-spoken, socially conscious “prestige pictures” made by Stanley Kramer and similarly ambitious American auteurs during the 1950s and ’60s. With artfully muted measures of amazement and outrage, actor-turned-feature-filmmaker Giulio Riccuarelli illuminates a relatively obscure chapter of German history, the campaign to identify, locate, and bring to trial some 22 “very normal Germans” who had actively facilitated the Final Solution at Auschwitz — but remained unpunished, and largely forgotten, long after the war ended.” – Variety

Kathryn has spent her professional life writing about, teaching, and presenting the arts. Founding Director of the Boulder Jewish Film Festival, Kathryn was Director of Menorah and ACE at the Boulder JCC from 2003 through August, 2019. The former film and theater critic for the Boulder Daily Camera, Kathryn is the author of "The Fifty Greatest Jewish Movies" and "The Fifty Funniest Films of All Time." kathryn.bernheimer@gmail.com
Previous West Side Story: A Tragic – and Jewish – Tale of Intolerance
Next HHS Offers Three Extraordinary Stories of Inclusion for JDAIM