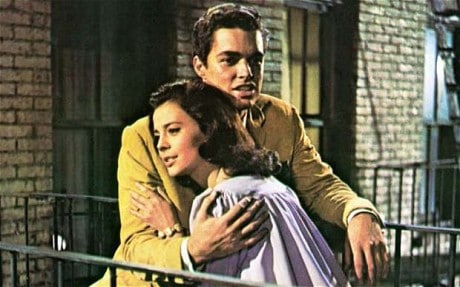 West Side Story: A Tragic – and Jewish – Tale of Intolerance

Kathryn Bernheimer January 31, 2016 Arts & Culture Comments Off on West Side Story: A Tragic – and Jewish – Tale of Intolerance Why is “West Side Story” considered a Jewish musical? Why has it been so fully embraced by Jewish audiences despite the fact that there are no Jewish characters in the iconic musical, a Romeo and Juliet inspired story of two rival gangs?

Perhaps is has something to do with the fact that all of its creators were Jewish.

In the play’s original conception, the feud was between a Jewish family and an Irish Catholic family. Laurents wrote a first draft in 1947, titled “East Side Story,” set during Passover/Easter, with a Jewish “Maria.” Because that plot bore too much resemblance to “Abie’s Irish Rose,” the Jewish creators dropped the project for five years before reimagining the story. Looking for two other ethnic identities to tell their tragic tale of racial prejudice, Bernstein and Laurents were inspired by the fairly recent social phenomenon of juvenile delinquents that was garnering headlines at the time. Laurents was familiar with Puerto Ricans in Harlem, and wanted to set his story there. The two contacted Robbins, who was enthusiastic about a musical with a Latin beat.

Thus, the team settled on a Puerto Rican gang, the Sharks, who end up in a turf war with the American toughs known as the Jets.

A surprise smash when it took Broadway by storm in 1957, “West Side Story” became an even bigger hit with audiences and critics when it was brought to the screen in 1961. It became the second highest grossing film of the year, and holds the distinction of being the musical film with the most Academy Award wins (10), including Best Picture. The soundtrack album made more money than any other album before it.

When Professor Ernesto Acevedo-Muñoz, chair of CU’s Film Studies Department, sat down to write a book about the fabled film, the Jewish backstory was not what intrigued him. In fact, drawing on his own Puerto Rican heritage, he was interested in providing a Hispanic perspective on the cultural aspects of the story. Indeed, his book, “West Side Story as Cinema: The Making and Impact of an American Masterpiece,“ explores the ways in which the film’s portrayal of Puerto Rican identity is neither as transparent nor as negative as some critics have charged. As much as the ethnic angle is of interest, the book’s main argument is that the famed film was an artistic triumph that marked an important departure in the history of American movie making. He makes a strong case for the film’s daring vision in combining music, dance, dialogue, and visual elements – especially color – in highly creative ways, while also addressing the social, racial, and class tensions of American society.

Whatever the attraction, “West Side Story” remains beloved by audiences of all backgrounds. An explosion of motion and vibrant color, the timeless classic is still relevant, still incisive, still bursting with energy – and, like the America it represents – ok by me!

SCHOLARS SERIES: CU at the J
West Side Story as Cinema: The Making and Impact of an American Masterpiece

With Professor Ernesto Acevedo-Muñoz, Chair of Film Studies at CU
Thursday, February 4, 7:00 pm
$12 in advance, $15 at the door
CLICK HERE TO REGISTER

Kathryn has spent her professional life writing about, teaching, and presenting the arts. Founding Director of the Boulder Jewish Film Festival, Kathryn was Director of Menorah and ACE at the Boulder JCC from 2003 through August, 2019. The former film and theater critic for the Boulder Daily Camera, Kathryn is the author of "The Fifty Greatest Jewish Movies" and "The Fifty Funniest Films of All Time." kathryn.bernheimer@gmail.com
Previous Week in Review: January 29th, 2016
Next What Holocaust? New Film Depicts Postwar Germany in Denial