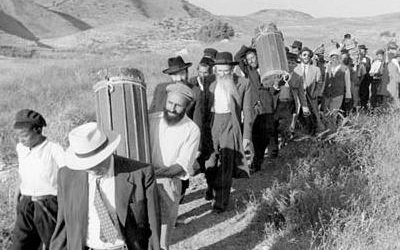 An estimated 850,000 Jews were forced to flee Muslim lands after the creation of the State of Israel. The term “Judenrein” had been used by Hitler to describe the Nazis’ desire to cleanse Europe of its Jews. Only a few years after the Holocaust, Jews were forced to flee their homelands in the Middle East. Today, many of these countries are indeed Judenrein, virtually free of Jewish communities that lived there for centuries – and in the case of Iraq, two thousand years.

The expulsion of Jews has an interesting analogy. The number of Jews expelled from Muslim lands is approximately double the number of Palestinians displaced after the war. The story of these Jews uprooted from home and community, however, is not as well known as the Palestinian refugee story. The reasons for the exodus included persecution, anti-Semitism, anti-Jewish riots, poverty, political instability and even physical expulsion, which drove Jews to to find a better economic status and a secure home in Israel, Europe or the Americas. Sylvain Hayoun remembers the rising anti-Semitism that forced his family to join Tunisia’s Jewish population in flight. Jews had lived in Tunisia long before the destruction of the First Temple in the 6th century BCE. The ruins of an ancient synagogue dates to the 3rd-5th century CE .

Although young at the time, he vividly recalls their escape to Paris. His family locked the door to their ancestral home, taking nothing to arouse suspicion, and slipped into the night. Returning many years later with his wife, he was greeted by the Arab “owners” of his house, who served him tea out of his parents’ teapot.

Kathryn has spent her professional life writing about, teaching, and presenting the arts. Founding Director of the Boulder Jewish Film Festival, Kathryn was Director of Menorah and ACE at the Boulder JCC from 2003 through August, 2019. The former film and theater critic for the Boulder Daily Camera, Kathryn is the author of "The Fifty Greatest Jewish Movies" and "The Fifty Funniest Films of All Time." kathryn.bernheimer@gmail.com
Previous Teens: Middle East Narrative 3.2
Next Boulder’s Community Yom HaZikaron Service May 11th