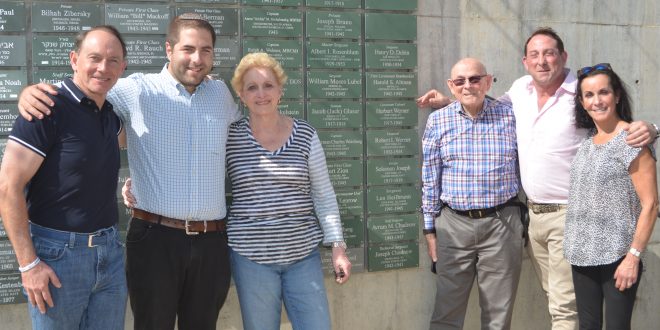 At first glance, Jerusalem may seem an unlikely locale to commemorate Veterans Day. But last week, as many Americans prepared for the U.S. holiday that honors those who served in the U.S. Armed Forces, one American family was in Israel doing just that at Ammunition Hill, the country’s memorial to the 1967 Six-Day War. As most of the Werner family was about to learn, this Jewish National Fund (JNF)-supported battle ground and national heritage site is indeed an appropriate place to observe the holiday, as well as to honor all Jewish military men and women who served in any country throughout time.

Ammunition Hill is located at the northern end of Jerusalem, mere feet from the 1948 ceasefire border with Jordan that divided the holy city for 19 years. On June 6, 1967, the fiercest battle of the Six-Day War took place at this strategic hilltop with Israeli paratroopers’ claiming victory over their Jordanian foes, leading directly to the capture of the Old City of Jerusalem and the reunification of the capital after almost 2,000 years.

Today, the site tells the story of that bloody battle in which 36 Israelis and 71 Jordanians died. But, according to Yoel Rosby, its story is about more than “who shot whom.”  Rosby, Ammunition Hill’s liaison to JNF, said that, “It’s about the moral code with which the Israelis fought that day and that continues to imbue the Israel Defense Forces. It’s a code that demands our soldiers to be humane and to treat our enemy with respect.”  In fact, following the bloody battle, the Israeli victors took time to respectfully bury 17 of the Jordanian soldiers who fell there before joining the fight for the Old City.

Last week, Ron Werner, a Denver and Palm Springs resident who co-owns the Colorado-based home furnishings retailer and design source, HW Home, Inc., brought his parents, brother, and sister to Ammunition Hill as part of a trip that included dedicating a boardroom at the Alexander Muss High School in Israel (AMHSI), another JNF-supported project. While the rest of the family assumed they were at Ammunition Hill that day for a tour with Rosby, Werner, who is a JNF National Board Member and former Mountain States board president, had another reason for them to be there. He had arranged a surprise ceremony to unveil three plaques at the site’s Wall of Honor, JNF’s tribute to Jewish service men and women worldwide, adding the names of his father, Robert, and his two grandfathers, Herbert Werner and Solomon Joseph, to the roster of names mounted there.

“Ammunition Hill is the symbol of the moral code for which Israel’s soldiers stand. These values are what connect all Jewish soldiers throughout time, so it makes sense to honor them here in this place,” Rosby said as the Werner family sat visibly moved. Robert Werner, who lives in Aventura, FL, with his wife, Florence, and who is celebrating his 85th birthday, is a veteran of the Korean War. Herbert and Solomon, Ron’s paternal and maternal grandfathers, respectively, and both from New York, fought in World War II.

Following the ceremony, Ron, who was quite emotional during the unveilings, said, “Today was about connecting our family in a tangible way to Israel. It was something special for my father and my mother, because until now we had nothing in Israel with their fathers’ names inscribed on them.”

As he watched his family step forward to view the plaques, Ron added:

“I think it’s important to make clear that wherever Jews live, they serve to support their nations, whether it’s in Israel or elsewhere. This message is particularly important in these times when Israel is being verbally battered and abused. The Wall of Honor at Ammunition Hill makes the point that service is part of the Jewish soul.”