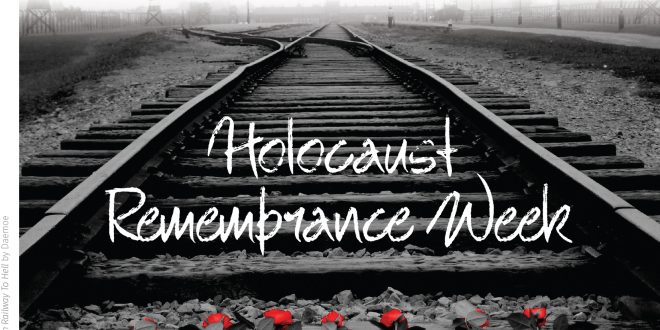 Never to Be Forgotten: Boulder Commemorates the Holocaust

Once an on-campus event organized by Hillel, the Holocaust Remembrance Week is now a collaboration between CU, the Dairy Arts Center, and Menorah: Arts, Culture and Education at the Boulder JCC.

The week begins Sunday with a concert, “Never to Be Forgotten,” on Sunday, April 17, 4 pm at the Dairy Arts Center. The concert features Classical Music and Camp Songs by Composers Murdered in the Holocaust. Performers include Faye Nepon, vocalist, Harumi Rhodes, violin, Amanda Riggers, piano. Cost: $18 / Tickets CLICK HERE. Presented by Music at the Dairy Arts Center – One Night Only

The week continues with a keynote screening and discussion on Monday, April 18, 4 pm in Humanities 1B 50, free and open to the public. “SURVIVING SKOKIE” is an intensely personal documentary by Eli Adler about his family’s experience of the Shoah, and a journey with his father to confront long-suppressed memories after American neo-Nazis stage a provocative march in their hometown in the late ‘70s

Curiously, the neo-Nazi villain of the story, Frank Collin, is–like Adler–the son of a Holocaust survivor.  Rejecting his father, Collin became a virulent anti-Semite, but his right to demonstrate in Skokie is nevertheless defended by the American Civil Liberties Union.  The ever-venomous Collin tells his lead counsel, a Jewish lawyer, “Don’t think just because you are representing me free of charge that when we take over this country you won’t be the first one to go to a gas chamber.”

As community leader and survivor Aaron Elster says in an interview: ‘The neo-Nazis accomplished something….they were the stimulus of the survivors getting together and saying hey, we’ve got to do something.”

And what they did was to end their years of silence, become truth tellers, and speak out so that their painful stories would not be forgotten. In “SURVIVING SKOKIE”, the filmmaker’s father, Jack Adler–a Polish Holocaust survivor–confronts his own past, returning to Poland with his son to tell the stories of family members who perished in the ghetto and death camps.  They visit Pabianice, Poland, Jack’s ancestral home and Auschwitz–retracing the steps of Jack’s horrifying journey.

“SURVIVING SKOKIE” is the story of a community’s battle against the voices and gestures of hate, of a quiet village and its once-turbulent history.  It is a universal story about the importance of speaking up and out.  And it is the personal story of a quest through which a man and his father rediscover their pasts.

“Not here, not now, never again,” they said,  forever transforming themselves from victims to activists.

Colorado premiere presented by Menorah: Arts, Culture and Education at the Boulder JCC

The rest of the week features three survivor talks:

Peter Behrendt: “Children of the Holocaust”

Barbara Steinmetz: “My Childhood:  Safe Haven in the Dominican Republic”

Kathryn has spent her professional life writing about, teaching, and presenting the arts. Founding Director of the Boulder Jewish Film Festival, Kathryn was Director of Menorah and ACE at the Boulder JCC from 2003 through August, 2019. The former film and theater critic for the Boulder Daily Camera, Kathryn is the author of "The Fifty Greatest Jewish Movies" and "The Fifty Funniest Films of All Time." kathryn.bernheimer@gmail.com
Previous Boulder Woman Selected as Birthright Israel Fellow
Next Weekly Edition: April 15th, 2016