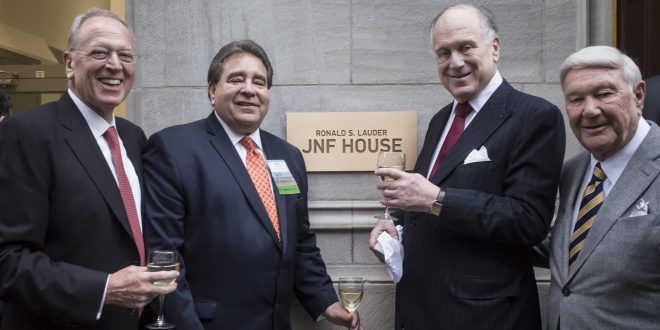 After Over Three Years of Construction, JNF Once Again Calls 69th Street Home “After several years of planning, hard work, and more than a bit of elbow grease, I’m excited to welcome all of you back to Jewish National Fund’s home on the Upper East Side of New York City,” said JNF National Board President Jeffrey E. Levine, who co-chaired the JNF Building Modernization Committee.

The day of celebrations kicked-off with JNF’s national board members from across the country gathering for their first official meeting in the Leonard J. Attman and Phyllis Attman Family Boardroom. This was followed by an official unveiling and dedication of the Ronald S. Lauder JNF House and reception in the Katharina Otto-Bernstein and Nathan A. Bernstein Assembly Hall where Consul General of Israel in New York Dani Dayan addressed the guests followed by a few brief words from Consul General of Austria in New York Georg Heindel.

“Years ago, Ronald Lauder myself and the National Board had several conversations about JNF House and whether or not we should move to a more modern space that could accommodate our growing needs,” said JNF CEO Russell F. Robinson. “Ronald stopped me and quickly said that we couldn’t leave JNF House. He had a vision. Just as JNF built a home for Jewish people everywhere in Israel, JNF too needed its home, its permanent home, and he would be willing to financially spearhead efforts to update the building and ensure its future as JNF’s home.” The building was originally owned by financier Arthur Sachs, who purchased two homes on east 69th Street in 1919 to raze them and build a new mansion. The building was designed by architect C. P. H. Gilbert, who designed more over 100 mansions in Manhattan and Brooklyn, several of which are designated New York City landmarks, and construction was finished in 1921. Sachs sold the building to Edward H. Foley, Jr., the Under Secretary of the Treasury under President Truman, in the early 1930s before being gifted to JNF in 1954.

“When I think about JNF, the first thing that comes to mind is Israel and the second thing is JNF House,” said JNF Chairman of the Board Ronald S. Lauder. “JNF is about life. The forests it planted and the water reservoirs it built forever changed Israel for the better. I’m happy that I could do something that would forever leave a lasting mark on such a wonderful organization.”

In 2012, the organization moved to a temporary office space so renovations could begin on the townhouse. During construction, JNF recycled enough paper and cardboard to save 1,200 mature trees. The project generated around 660 tons of construction waste and of this, 95% was able to be recycled. To further cut back on waste, JNF was able to repurpose much of the existing building and reuse many of the original fixtures and the monumental doors. The building has been awarded a Silver Rating from the United States Green Building Council’s LEED™ rating system. LEED™ buildings are healthier for occupants and boast high performance, saving money and resources. Buildings like the Ronald S. Lauder JNF House are helping transform the way people think about the environment.

“Thanks to our incredible capital campaign for the Ronald S. Lauder JNF House, we have not only paid for the entire renovation as well as the building’s furnishing and equipment, but have also been able to create a capital reserve so no funds from JNF’s annual campaign will need to be used for the upkeep of the building,” said JNF National First Vice President and JNF Building Modernization Co-Chair Alan Dabrow. 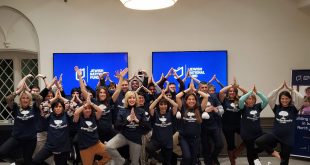