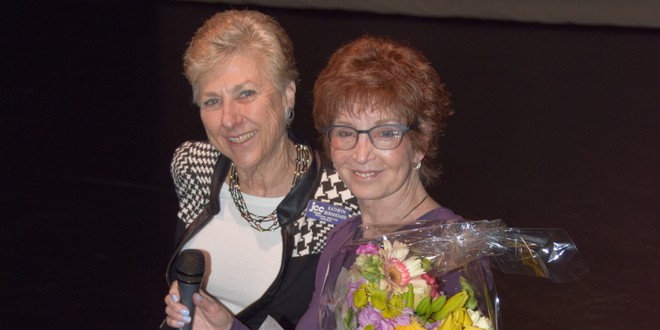 The Boulder Jewish Film Festival held its wrap party on Sunday night with a screening of “Dough“, sponsored by the Boulder Jewish News. The film stars Jonathan Pryce as an Orthodox Jewish baker in a London neighborhood that is fast losing its Jews — and his customer base. A young Muslim refugee from Darfur becomes his apprentice, initially to cover his marijuana dealing, but manages to save the business when he accidentally spills pot into the week’s challah dough… a very appropriate Boulder movie.

The wrap party featured music by Sheldon Sands and friends, and of course, brownies and other baked goods were served for dessert after the screening at The Dairy Arts Center.  Although The Dairy’s new lobby wasn’t quite finished, the part of the space that is completed was a wonderful upgrade of the facility, and we look forward to seeing it completed. (The BJFF actually has one more movie scheduled for Monday – “Son of Saul,” the 2016 winner of the Academy Award for Best Foreign Language Picture. A few tickets are still available for the 1:30 pm Monday screening.)

This year’s festival continued the BJFF’s growth and success for another year, setting new records for number of films and number of attendees across the ten days of screenings.  We look forward to seeing what Director Kathryn Bernheimer, Menorah and Boulder JCC have in store for us in 2017.

I've been writing things since grammar school, and served as a writer, photographer and/or an editor on my junior high and high school newspapers; the Daily Trojan at USC (where I earned my journalism degree); the student newspaper at the Anderson School at UCLA (where I earned my MBA); and written and edited countless business documents and presentations in the ensuing twenty years. I've been involved Jewishly since my bris and in Boulder since 1995. I'm married to my Executive Director Cheryl, and we have two children, Lauren and Ethan.
Previous April First Friday: Sustainable Israeli-Palestinian Projects (SIPP)
Next JNF’s Colorado-Israel Water Summit Brings Together Israeli and Local Experts