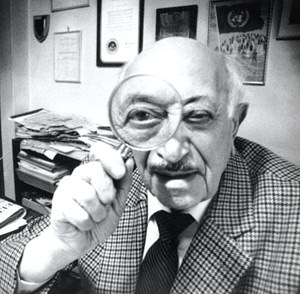 Kathryn Bernheimer March 5, 2015 Arts & Culture Comments Off on The Good People Behind Good Films at the Boulder Jewish Film Festival

A one-man show, simply titled “Wiesenthal,” ended its New York run last week. The production caught my eye when it opened because of my decision to invite Academy Award-winning filmmaker Richard Trank to the Boulder Jewish Film Festival. At the time, I knew the festival’s two-day tribute program would consist of the premiere of “The Prime Ministers: Soldiers and Peacemakers,” and a handful of his earlier documentaries, all produced by the Simon Wiesenthal Center’s Moriah Films. (www.wiesenthal.com)

As deadlines loomed in the fall, I had to narrow down the selections, a painful process since each of the documentaries Trank has directed, written and/or produced is more than worthy of inclusion.

In the end, the Wiesenthal documentary “I Have Never Forgotten You,” narrated by Nicole Kidman, did not make the cut, in part because Wiesenthal is so well known – unlike some of Moriah’s other film subjects. However, next fall Menorah will offer an examination of the Nazi hunting phenomenon, and will pay tribute to the most famed of the sleuths at that time.

In preparation for the festival, I have been studying this tireless quest for the prosecution of the perpetrators of Jewish genocide that continues in the present day. My husband and I watched both seasons of “Nazi Hunters,” as well as the new documentary “The Last Nazi Hunter,” and various films pertaining to the subject. Ironically, the film I will introduce at BIFF on Saturday at 5:00 pm, “Mr. Kaplan,” comically touches on the subject, as an elderly man in Uruguay becomes convinced he’s discovered a wanted Nazi war criminal.

Although Moriah Films springs from the vision and values of Wiesenthal, Nazi hunting is a small part of the center’s mission, as its diverse catalogue of films reveal. The range as well as the importance of the Simon Wiesenthal Center, run by Rabbi Marvin Heir since its founding in 1977, cannot be emphasized enough.

This global human rights organization, dedicated to researching the Holocaust and hate in both historic and contemporary contexts, has done incredibly vital  work fighting anti-Semitism and terrorism, standing by Israel, promoting human rights, teaching the lessons of the Holocaust to future generations, and defending the safety of Jews around the world.

Wisely recognizing the power of film to promote its message, the center created Moriah Films. The 13th  and latest title in its catalogue is the second of a two-part adaptation of the best-selling book by renowned historian and Ambassador Yehuda Avner, “The Prime Ministers.” It will have its Boulder premiere Saturday, March 15 as the festival’s gala opening night in the Dairy Center’s Performance Space. Although Prime Minister 2 stands on its own, the festival will screen the first installment the night before in the Boe, Saturday March 14 at 7:45 pm.

The center’s main office is in Los Angeles, but there are regional offices around the world. The center has a Museum of Tolerance in LA, New York and Jerusalem. The center also has a campus outreach program, an online publication, and has produced Digital Terrorism and Hate 2013, which details how the internet has become a critical tool for terrorist organizations.

There is a strong local association with the Wiesenthal Center, which is governed by a distinguished board of directors. The chair is Larry Mizel, Denver’s most prominent and effective Jewish philanthropist.

The only Jewish agency to have an active educational film production department, the Wiesenthal Center has established a reputation for cinematic excellence. Two of Moriah’s films have earned Oscars.

The 1997 Oscar winner for best documentary feature, “The Long Way Home” (narrated by Morgan Freeman), which was the first film to focus on the tragic plight of Jews immediately following the Holocaust, will be shown on Monday, March 16 at 1:00 pm in the Boe.

Trank will also be discussing three other films. The most compelling and least known is “Against the Tide” (narrated by Dustin Hoffman), which elicits shock and outrage. Even many well-educated Jews have never heard the story of Peter Bergson (real name Hillel Kook) and his frantic and largely futile efforts to save the Jews of Europe.

Although Winston Churchill is a famed political force in history, many people do not know about his valiant – and also futile – fight against the rise of Nazism. “Walking with Destiny” (narrated by Ben Kingsley) tells this story of early and vociferous – albeit unheeded – opposition to Hitler.

Theodore Herzl’s name is also well-known, but “It is No Dream: The Life of Theodore Herzl” (starring the voice of Christoph Waltz) helps audiences understand the formation of the Jewish homeland and the values that forged the state, as well as its role in assuring the Holocaust will never happen again.

I consider it both a coup as well as an honor to bring Trank to Boulder with six remarkable films. His mother Joyce and sister Lisa live in Boulder, so that in addition to providing audiences with an exceptional opportunity to glean wisdom from the director of seminal Jewish films, I am also performing another mitzvah: bringing a Jewish mother (and sister) naches (pride).

Kathryn has spent her professional life writing about, teaching, and presenting the arts. Founding Director of the Boulder Jewish Film Festival, Kathryn was Director of Menorah and ACE at the Boulder JCC from 2003 through August, 2019. The former film and theater critic for the Boulder Daily Camera, Kathryn is the author of "The Fifty Greatest Jewish Movies" and "The Fifty Funniest Films of All Time." kathryn.bernheimer@gmail.com
Previous CU-Boulder Jewish Studies Professor to Discuss Modern American Judaism
Next Shmita in America: Support CSA, Farmers and Farmworkers