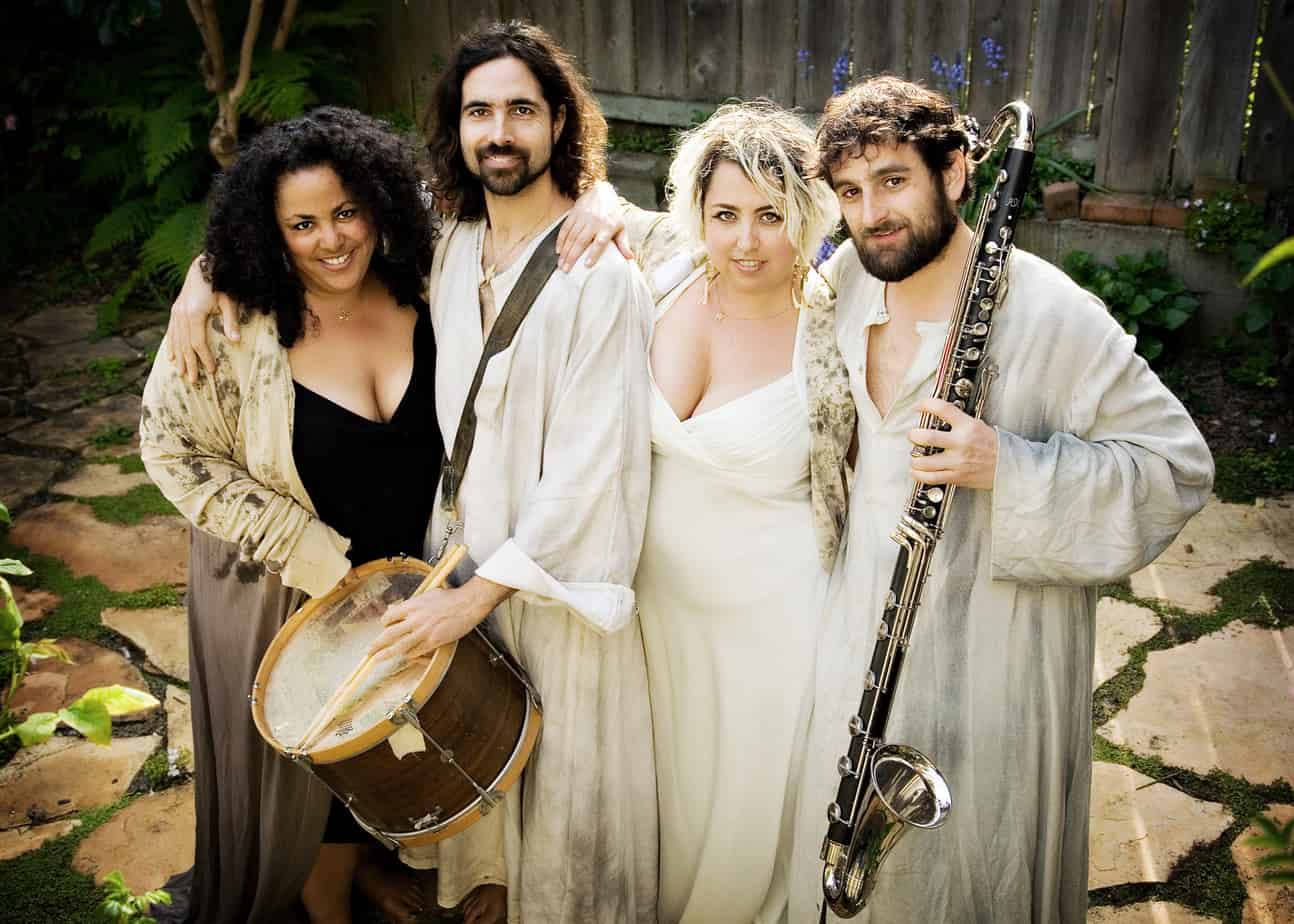 The Program in Jewish Studies at the University of Colorado Boulder is pleased to announce two performances by critically-acclaimed performers Jewlia Eisenberg and Charming Hostess of The Ginzburg Geography, an original multi-media musical performance drawn from the life and work of the anti-fascist writers and artists Natalia and Leone Ginzburg. In conjunction with the American Association of Italian Studies conference, the Weekend of Jewish Italian Culture will host the first concert on Saturday, March 28, 8:30 p.m. in the Glenn Miller Ballroom on the CU campus. The Program in Jewish Studies will sponsor the second show as part of the Day of Radical Jewish Music on Monday, March 30, 7:00 p.m. in Old Main Theater, also on campus.

Exploring Natalia and Leone’s journeys of love, resistance, exile, and liberation, The Ginzburg Geography features original music composed and performed by Charming Hostess and developed from the writings of the Ginzburgs and from traditional music from the Italian regions of Turin, Abruzzo, and Rome, places central to their lives. The performance also includes music from Italian Jewish liturgy, the oldest and most remote in Europe, as well as Italian anti-fascist songs, work chants, and resistance anthems. While The Ginzburg Geography refers specifically to physical locations, it also resonates with the actions and relationships associated with those places, evoking sense-memories of places in time.  Most of all, it is a concert of music that inspired generations with its yearning for freedom but is little known outside Italy.

Charming Hostess is a musical ensemble at the intersection of voice, text, and diaspora consciousness. Eisenberg founded the group in 1998 and says, “our mission is to make lovely noise about complex ideas.” In their performance, individual voices and communal experiences come together to create a dialogic, multi-faceted whole. The New York Times writes that “Charming Hostess makes music like no other,” and their eclectic blend of original compositions and ethically diverse traditional songs “lets listeners discover whether they can think and dance at the same time.”  According to The San Francisco Chronicle, “Jewlia Eisenberg’s work is irreverent and ambitious. Charming Hostess radiates female energy and her singing transforms the spirit.”

Eisenberg, a composer, extended-technique vocalist, lay cantor, and founder of Charming Hostess, has collaborated with Fantom Slobode, choreographer Jo Kreiter and filmmaker Lynn Sachs. Commissioned work includes Harmonices Mundi, an opera about Kepler’s mother, and Red Rosa, a song cycle based on the letters of Rosa Luxemburg. She has been an Artist-in-Residence at MIT and the University of Denver; she has studied with sozanda Muna Nissimova, Fred Frith, and Daniel Boyarin.  She “unleashes music brilliantly conceived and performed….The sound of these powerful voices coming together is truly uplifting and even implicitly political” (San Francisco Bay Guardian).

Jewlia Eisenberg and Charming Hostess’s visit is presented by the University of Colorado Boulder’s Program in Jewish Studies, and co-sponsored by the Department of French and Italian and the CU Art Museum.

The Program in Jewish Studies at the University of Colorado Boulder provides an outstanding liberal arts education, fosters critical thought and instills an appreciation of humanity’s interrelatedness and diversity by studying the world’s oldest global people. With internationally acclaimed faculty engaged in cutting-edge research and opportunities for students to study with leaders working in the field of Jewish Studies, the program offers an innovative curriculum designed to provide a strong foundation in cultural education and connect Jewish thought and text to action and people’s lives. The Program in Jewish Studies offers a Bachelor of Arts degree in Jewish Studies as well as minors in Jewish Studies and Hebrew/Israel Studies. For more information visit, http:// colorado.edu/jewishstudies. colorado.edu/jewishstudies.

Previous Boulder-Friendly Recipes, Seders and Ways to Make Passover Meaningful
Next Mi Chamocha? A Poem to Help Set Your Prayers in Motion