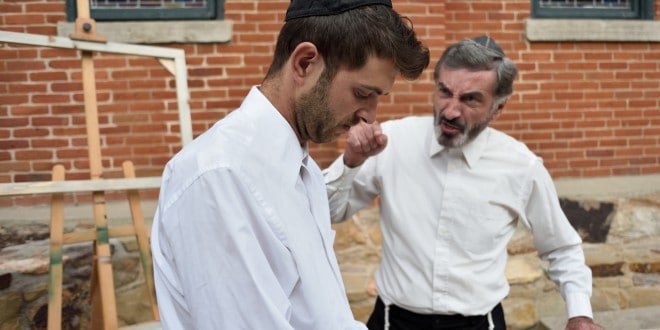 Miners Alley Playhouse presents the regional premier of “My Name is Asher Lev” Friday, September 11 through Sunday, October 18 with performances every Friday and Saturday at 7:30 pm and Sundays at 6:00 pm (2:00 pm on Sun., October 18). Tickets are $23 and are available by calling 303-935-3044 or online at minersalley.com Miners Alley Playhouse is located at 1224 Washington Avenue. Golden, CO 80401.

“My Name is Asher Lev” follows the journey of a young Jewish painter torn between his Hassidic upbringing and his desperate need to fulfill his artistic promise. When his artistic genius threatens to destroy his relationship with his parents and community, young Asher realizes he must make a difficult choice between art and faith. This stirring adaptation of a modern classic presents a heartbreaking and triumphant vision of what it means to be an artist. The cast includes Curtiss Johns as Asher Lev, Albert Banker as The Men and Jacqueline Garcia as The Women.

“A profound declaration of the power of storytelling on a stage.”
~ Philadelphia Inquirer

Aaron Posner has written and adapted about 20 plays including “Life Sucks” and “Stupid F***king Bird,” both irreverent variations on plays by Anton Chekhov, a new family musical called “The Gift of Nothing,” adaptations of Chaim Potok’s “The Chosen” and “My Name is Asher Lev“. He is a founder and former Artistic Director of Philadelphia’s Arden Theatre and has directed at major regional theaters from coast to coast.

They call me "NewsHound IV," because I'm a clever Finnegan, sniffing out stories all over the Boulder area. I love Jewish holidays because the food is GREAT, especially the brisket. Well all the food. I was a rescue pup and glad to be on the scent!
Previous Baruch Dayan Ha’emet: Reid Levin z”l
Next Week in Review: August 28th, 2015