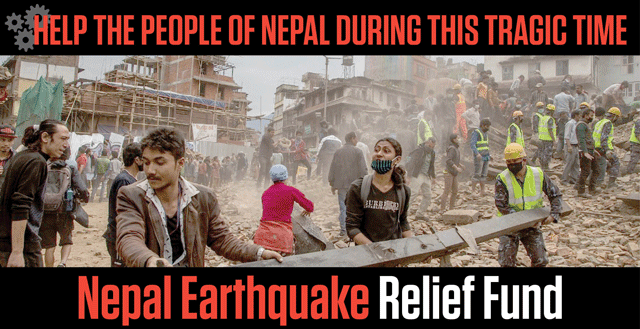 Joseph Dubroff May 14, 2015 News Comments Off on JEWISHcolorado Continues To Raise Money For Nepal Earthquake Relief

DENVER, Colorado – (May 13, 2015)— Two and a half weeks after the catastrophic 7.8 earthquake took thousands of lives in Nepal on April 25, the already-traumatized Nepalese people were affected by yet another large scale quake. Earlier this week, a 7.3 magnitude earthquake struck Nepal, resulting in additional injuries and fatalities in Nepal, India, and China.

Just as residents were trying to return to normalcy, tremors set off landslides, buildings collapsed, houses were damaged, and fear and anxiety consumed the nation.

Last month’s earthquake left more than 8,000 people dead, over 14,000 injured, and hundreds of thousands homeless. There was already a substantial lack of supplies and materials available to relief workers prior to the new quake. According to the United Nations, only 13 percent has been raised of the $423 million needed to help Nepal recover from the April quake.

Soon after the earthquake struck, JEWISHcolorado and the Jewish Federations of North America (JFNA) joined the relief effort to provide critical assistance. In addition, our partner agencies at the Israel Defense Forces (IDF), IsraAID and the American Jewish Joint Distribution Committee (JDC) were among the first on the ground responding to the crisis.

JEWISHcolorado has raised over $21,000 to date. The funds raised will help support Israel in sending an IDF delegation to conduct search and rescue operations. This delegation set up a fully functioning field hospital with operating rooms, X-ray equipment, and pediatric care, treating more than 700 patients. Trained rescue and medical personnel also brought 90 tons of equipment and medical supplies. At the same time, JDC supplied two neonatal incubators for the IDF field hospital and sent urgently needed supplies to Nepal.

“Our hearts go out to the people of Nepal as they struggle to recover and rebuild,” said JEWISHcolorado President and CEO Doug Seserman. “Once again, our community–along with Jews across the globe—responded quickly with an outpouring of support and demonstrated the true meaning of Tikkun Olam, to repair the world.”

JEWISHcolorado will continue to collect donations for assistance through its Nepal Earthquake Relief Fund at JEWISHcolorado.org. One hundred percent of all money raised is allocated to relief efforts.

Founded in 1946, JEWISHcolorado, formerly known as Allied Jewish Federation of Colorado, is the umbrella community organization inspired by the collective responsibility to build and sustain Jewish life in Colorado, Israel, and around the world.  Its mission is to secure, steward, and share philanthropic and human resources in support of vibrant Jewish life as well as to mobilize the community in times of need.  JEWISHcolorado is a proud member of the Jewish Federations of North America, which is among the top ten charities on the continent. JEWISHcolorado raises and distributes funds in support of a wide variety of programs and partner organizations both locally and globally. Last year, JEWISHcolorado’s Annual Campaign raised $10.7 million and the Endowment and Planned Giving arm houses more than $55 million in long term assets for individuals, agencies and synagogues in the community.  For more information, visit www.JEWISHcolorado.org

Joseph Dubroff is the Director for External Affairs for JEWISHcolorado. JEWISHcolorado provides a pathway for Coloradans to connect with their Jewish identity and values. We offer diverse, creative and inviting opportunities to embrace all Jews at every age and stage in life. Since 1946, JEWISHcolorado has offered programs and services to unite with the people of Israel and ensure a thriving and lasting Jewish community in Colorado. For more information, visit www.JEWISHcolorado.org.
Previous 6 Teen Entrepreneurs Improving Our World
Next Week in Review: May 15th, 2015