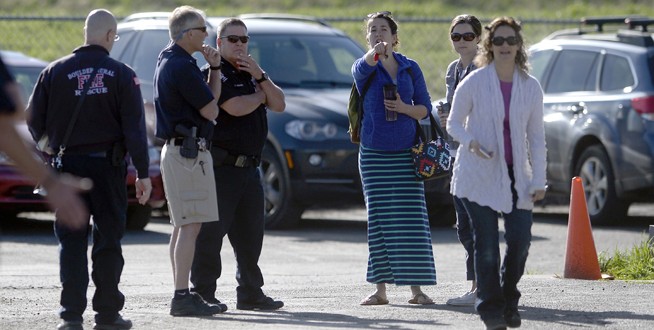 Photos from the scene of a hazmat situation at the Jewish Community Center in Boulder on Monday morning. Mark Leffingwell Staff Photographer April 6, 2015

UPDATE 6:45 pm: Nothing further has been reported at any other Jewish organizations today.  The full story can be found on the Daily Camera site: “Poison Scare: Two Boulder Jewish Centers Hit With Suspicious Letters”

UPDATE 12:45 pm: The substance found at Congregation Har HaShem was also determined not to be toxic.  Congregation Nevei Kodesh requested police presence before opening their mail.  Congregation Bonai Shalom’s offices are closed on Monday.  Other Jewish organizations with Boulder addresses have been notified to be on the lookout for suspicious envelopes.

UPDATE 11:30 am: Another envelope with white powder was discovered at Congregation Har HaShem, and Har HaShem’s buildings have also been evacuated.  The Sheriff’s Department reports that the powder found at the Boulder JCC is harmless.  The note found with the envelope at BJCC said “your (sic) have enemies”, according to a press release from the Sheriff’s Office.

The Boulder JCC released the following statement earlier this morning:

At 8:10 am this morning, a JCC staff member found an envelope containing white powder. We immediately evacuated the building and contacted the local Sheriff’s office. Both the Sheriff’s Office and fire personnel responded immediately. They have secured the building and are going through the necessary protocol to ensure everyone’s safety. In addition, they have closed off a portion of Kalmia closer to the building. The Sheriff’s Office is investigating the incident and will notify us with any new information.
When events like these arise, the Board and Staff of the Boulder JCC take them very seriously. We place the safety and well-being of our community as our highest priority, and therefore wanted to share this information with you. We will continue to maintain a high level of safety and security and will keep you informed as we receive additional information.
Jonathan Lev             Susie Valdez                                        Matt Rich
Executive Director    EC, Youth, and Family Director     Board President”

They call me "NewsHound IV," because I'm a clever Finnegan, sniffing out stories all over the Boulder area. I love Jewish holidays because the food is GREAT, especially the brisket. Well all the food. I was a rescue pup and glad to be on the scent!
Previous JEWISHcolorado and JCRC Weigh In on US-Israel Relations
Next “Aghet: A Genocide” Premieres at the BOE