John Rosengren, author of "Hank Greenberg: The Hero of Heroes," will be speaking at the Denver Jewish Community Center on March 1, 2015 about his latest book.

Author of Hank Greenberg Biography to Speak in Denver

Staff February 12, 2015 Arts & Culture Comments Off on Author of Hank Greenberg Biography to Speak in Denver 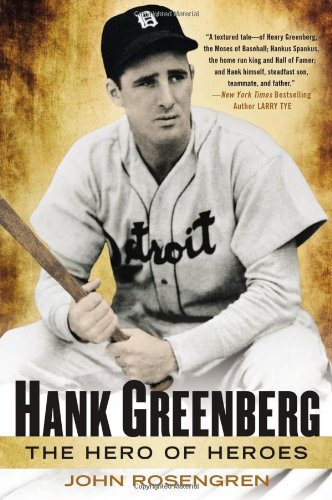 John Rosengren, author of “Hank Greenberg: The Hero of Heroes,” will be speaking at the Denver Jewish Community Center on March 1, 2015 about his latest book.  With his broad shoulders and mighty bat, Hall of Famer Hank Greenberg transformed the way the world viewed Jews and the way Jews saw themselves.

During a time of intense persecution abroad and at home, the 6’4” Greenberg stood tall as a beacon of hope and, ultimately, became a hero to all Americans.  Hank was baseball’s biggest star when he was drafted into the Army and then re-enlisted into the Air Force while sacrificing prime years of his playing career to defend his country and represent the patriotism of Jewish-Americans.

Shortly after the Penguin group published my definitive biography HANK GREENBERG:  The Hero of Heroes, I received an email from a Denver resident, Jim Golanty. His grandfather was a good friend of Greenberg’s and helped him out of a jam.

“See, in addition to being a helluva ballplayer and a cultural icon, Greenberg was very good-looking and single. No surprise that the ladies liked him, and he liked the ladies. So one night a female friend of his accidentally broke her arm in his bed while they were doing some romantic gymnastics. That’s in the book, how Greenberg called one of his close friends, Harold Allen:

Allen arrived at the Leland Hotel (where Greenberg lived in Detroit) with Herman Golanty. Allen called his personal physician and made arrangements for the woman to have her arm set. They snuck her out the back way and through the alley to the hospital. Golanty gave her some money. They told her not to say anything. She didn’t.”

They were different times, indeed.

John Rosengren is an award-winning author of seven books, including Blades of Glory: The True Story of a Young Team Bred to Win and Hammerin’ Hank, George Almighty and The Say Hey Kid: The Year that Changed Baseball Forever.

They call me "NewsHound IV," because I'm a clever Finnegan, sniffing out stories all over the Boulder area. I love Jewish holidays because the food is GREAT, especially the brisket. Well all the food. I was a rescue pup and glad to be on the scent!
Previous Jail vs Fines?
Next Is Paris — And Europe — Burning?