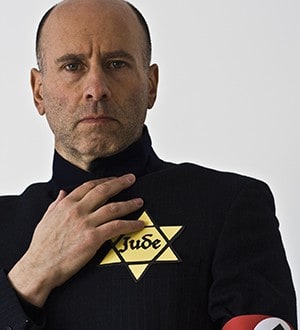 On Thursday October 29th the Arvada Center will be hosting “The Mitzvah Project” – a one man play by Roger Grunwald that explores the story of the 150,000 partly Jewish men, called Mischlinge, who served in Hitler’s armed forces during World War II – what the NY Times calls, “A Hidden Chapter in World War II History”.

Actor-playwright Roger Grunwald 64, who is a son of holocaust survivors – plays three characters, the part of Christoph Rosenberg, a half-Jewish lieutenant in the German army, Schmuel Berkowicz, a Polish Jew from Bialystok, and The Chorus, a Groucho Marx-like comedian.

After the performance, Mr. Grunwald leads a discussion with the audience.

Tickets for the event are sold through the Arvada Center box office. Show time is 7:00 pm to 8:30 pm.

Tickets are also available for a post-show VIP reception with cocktails and light refreshments that will give guests an opportunity to meet personally with Roger Grunwald. VIP tickets are only available for purchase over the phone or in person at the box office

“The Mitzvah Project” is being presented as a joint event with the Arvada Center and Chabad of NW Metro Denver.

Tickets are available online or by calling the box office 720-898-7200. For more information visit www.COJewish.com/mitzva

Roger Grunwald has been a professional performing artist for over thirty years. Roger was honored with a grant from the New York Foundation for the Arts (NYFA) for the creation of The Mitzvah Project. He is a veteran theatre, film, TV and voice actor and has appeared in over 70 stage productions in the United States and Europe.

Roger was also an activist-builder, fundraiser and Public Relations Director for the non-profit All Stars Project (ASP), which has pioneered an innovative approach to youth development using theatrical performance.