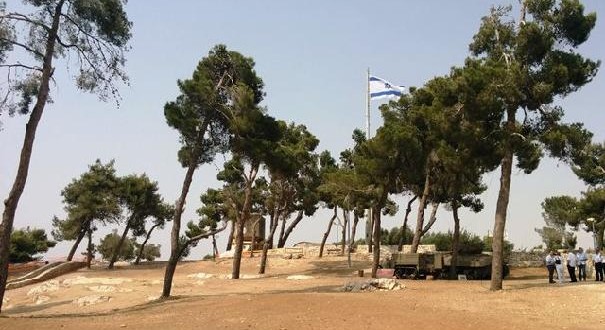 Ammunition Hill in Jerusalem, site of the last major battle in 1967.

Only the occasional sniffle or wiping of damp eyes could be heard over the hushed voices of the friends and families of the fallen. Dozens of families and comrades of Israeli soldiers killed in the 1967 Six Day War gathered on Wednesday, August 5, on Jerusalem’s Ammunition Hill to commemorate the opening of a new commemoration hall honoring the 182 soldiers who died in the battle for Jerusalem.

Ammunition Hill, site of some of the fiercest fighting in the Six Day War, was long neglected as a memorial site despite being a monument to the Paratrooper Brigade, whose soldiers captured its trenches and bunkers from the Jordanian Army at a great loss of life. At the solemn ceremony, visitors from around the country came to pay their respects and have a first look at the commemoration hall. Among them were veterans of the war, widows, children and grandchildren, and one of them an IDF soldier in uniform – a paratrooper like the 36 who fell on this hallowed ground.

“The opening of this new hall marks the beginning of a new era for Ammunition Hill,” Jerusalem Mayor Nir Barkat said in a statement. “With the help of Jewish National Fund donors and the Government of Israel, Jerusalem’s hallowed battle ground now has a remarkable monument that properly honors those who fell there in the Six Day War. It is my sincere hope that this new memorial serves as a comfort to the families of the soldiers and as a tool for educating future generations.”

Inside, the cool air and serene atmosphere of the circular hall offered both reprieve from the baking heat of the August sun, as well as moments of reflection.

Children poked at touch screens allowing interactive engagement with the soldiers’ lives. Brothers, sisters, widows, and friends snapped photos of old black and white photographs of the soldiers hanging along the wall and silently gazed at items belonging to the fallen displayed in vitrines: watches, swimming medals, letters and poems, photographs.

“It’s so him,” one family said, looking at a young man in a photo. The pictures, subtitled with names and where each soldier fell, tended to be dynamic and casual rather than formal and stoic.

Outside, Ori Abramson, the architect who designed the memorial, puffed methodically on a pipe. A former IDF paratrooper himself, Abramson said his design strived for a way “not to create a depressing space” through the use of light. An aperture in the ceiling of the circular room lets the warm glow of the sun light the space. The walls bearing the photographs are backlit.

Abramson said his objective was also to select pictures and objects relatable to generations to come – ones which helped bring the fallen to life.

“These guys were young. They had families, sweethearts, kids,” he said. “We worked very hard to create… this picture of depicting the men not only as elements of memory, but also living.”

Among the Ammunition Hill veterans at the special ceremony was Yaki Hetz. “It’s most impressive,” he said of his first impression upon entering the hall. “It’s something different, completely different.”

The bloody fight  to take the hill in ’67 was “the battle that determined the campaign for Jerusalem,” Hetz said, and it was a decorous homage to his friends who sacrificed everything for it. As people sat contemplating the surroundings in the Gould amphitheater, lilting harp tunes were offered by Noa Gabay, setting a peaceful  final stage in what had been a long process in rehabilitating the battle site.

“The dedication of this hall is not just a date on the calendar, it also symbolizes something for Ammunition Hill’s continuation in the future,” said Katri Maoz, director of the Ammunition Hill memorial. The $5.2 million project was funded by the State of Israel, JNF-USA, and the generosity of Bruce K. Gould of Orlando, Florida who dedicated it in honor of his parents Jean and Norman Gould.

“Erecting this memorial complex on this hill should not be taken for granted,” Aryeh Mualleh, deputy director general of the Defense Ministry said. “This place where we are today is a testament to the struggle made for our country in general, and the struggle for Jerusalem in particular.”

The memorial’s unique design, emphasizing the personal aspects of the soldiers, served to connect the memories of the fallen to the living families and the generations to come, he said.

For Hetz, the hall provides a sense of continuity and a fitting tribute. His friends whose faces line the walls of the memorial “will always remain alive in my memories, but my memories won’t last forever. This place will.”

Calling Colorado home since 2004, I am honored to work for the Jewish National Fund as the Senior Campaign Executive for the Mountain States Region. I work with the Mountain State communities, connecting with individuals, organizations, and community leaders who share Jewish National Fund’s passion and goals.
Previous Jaden Park Bar Mitzvah
Next Adult Learning Opportunities Leading Up to the High Holy Days