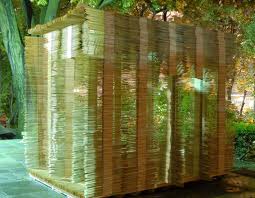 Not Your Grandparents’ Sukkah: A Film Bound to Inspire

Kathryn Bernheimer February 24, 2014 Arts & Culture Comments Off on Not Your Grandparents’ Sukkah: A Film Bound to Inspire So what is Sukkah City – the phenomenon depicted in the opening night film of the Boulder Jewish Film Festival Sponsored by the Millstone Evans Group of Raymond James? The provocative documentary, with filmmaker Jason Hutt in person, screens Thursday, February 27 at 7:00 pm in the Dairy Center for the Arts’ Performance Hall, with a dessert reception catered by Breadworks in the lobby following the film. The answer to what Sukkah City is – or was – starts with journalist Joshua Foer, brother of author Jonathan Safran Foer, and Roger Bennett, co-founder of Reboot, which aims to catalyze innovation in Jewish culture, rituals, and traditions. With support from Reboot, Foer and Bennett launched an international architectural design competition resulting in a unique – and uniquely Jewish – installation art project.

In September of 2010, New York City’s Union Square Park was transformed into a sukkah encampment; a desert oasis filled with the most original, outrageous, and imaginative Sukkot festival booths in recorded history. A committee of art critics and architects were assigned the daunting task of selecting 12 winners from a field of more than 600 entries submitted by contestants from 45 countries – most were not Jewish – who were obliged to follow basic halachic guidelines while re-booting the sukkah for the 21st century.

The twelve winning sukkahs were put on display and the sukkah voted  “the people’s choice” by the 200,000 people who came to gawk and admire remained standing for the requisite seven days of Sukkot. Some entries were also selected for display at the Center for Architecture in New York City. One sukkah, inspired by the eruv, was made out of a single length of wire. Another looked like a prickly porcupine. And a third, offering commentary on the nature of the sukkah as a shelter of impermanence, was constructed out of cardboard signs once held by homeless people. Following the film’s premiere at the Jerusalem Film Festival in July, I asked Hutt, a Jewish documentary filmmaker with a coincidentally appropriate last name, how he came to be involved in this amazing project. Hutt said he already knew Joshua Foer, and when he asked his friend who was filming his ambitious venture for posterity, Foer replied, “You are.” Thus began a multi-year collaboration.

Like the historic project itself, the film explores the complexities of the meaning and observance of Sukkot — religious, cultural and architectural. Hutt’s previous work includes a documentary about the religiously observant boxer Dmitriy Salita, “Orthodox Stance,” which will be screened Friday, February 28, with Hutt in person.

Hutt said he was struck by the notion of the contest when he saw the initial call for entries. “That just sounds like a fantastic combination of activities,” he recalls thinking. “And it would be a really dramatic process to film from start to finish.” The film in a sense is just this really wonderful sort of playing out of creativity and invention,” says Hutt. “And I think ultimately that the audience will find it inspiring and enjoyable.”

Hutt thus aptly describes my immediate reaction to the film, which was followed by an animated Q&A. I told Hutt after the screening that this “inspiring and enjoyable” film was bound to be a hit on the Jewish film festival circuit, and on the spot invited him to Boulder. My prediction has proved correct.

All the films in our festival are excellent. But “Sukkah City” holds a unbeatable fascination for a Jewish audience.  Get your tickets here.

Kathryn has spent her professional life writing about, teaching, and presenting the arts. Founding Director of the Boulder Jewish Film Festival, Kathryn was Director of Menorah and ACE at the Boulder JCC from 2003 through August, 2019. The former film and theater critic for the Boulder Daily Camera, Kathryn is the author of "The Fifty Greatest Jewish Movies" and "The Fifty Funniest Films of All Time." kathryn.bernheimer@gmail.com
Previous #MakeItHappen Micro Giving Circle Awards Eight Grants
Next Teresa Weddle z”l