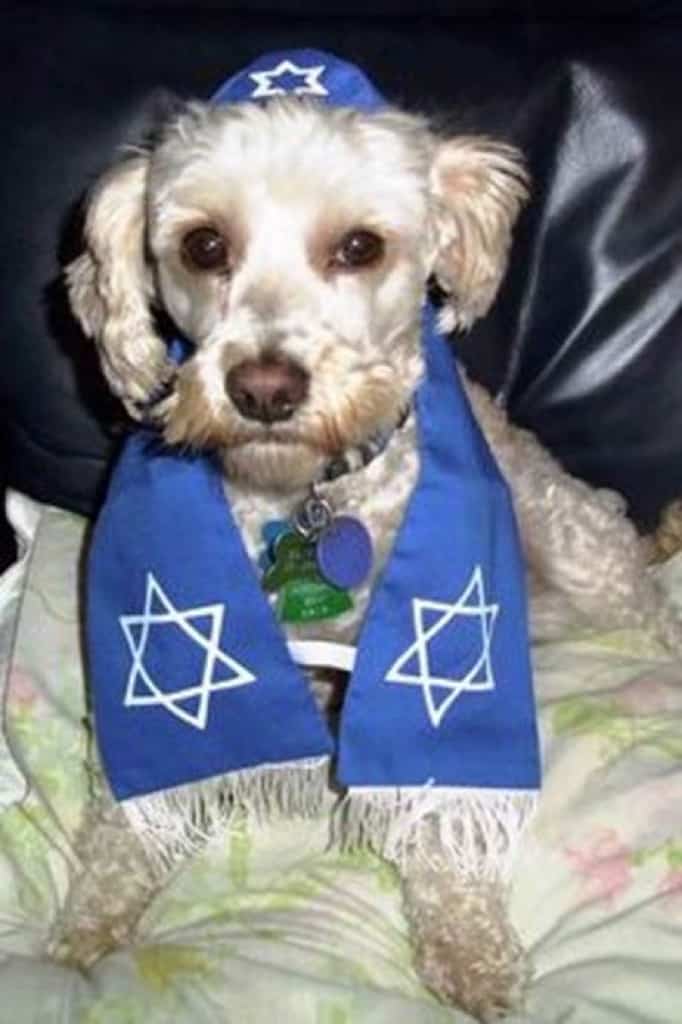 Oliver, a poodle mix who is about 5 years old, was adopted by Denver native Norman Chandler from the MaxFund dog shelter on 10th and Galapago Street in Denver.

They are every bit members of our Jewish families.

Our beloved dogs, cats and other pets enrich our lives with their absolute love and loyal companionship.

Jewish tradition, dating back to Biblical times, recognizes those who were kind to animals.  In fact, Jewish law provides animals many of the same rights as humans, including rest on Shabbos.

Beginning this week, JNF and Radio Chavura are asking Mountain States pet lovers to share their favorite Jewish pet photos and stories with the public, while also supporting the vital work conducted by JNF in building a prosperous future for the land of Israel and its people.

The first MishPAWcha™ pet to be showcased as the Rocky Mountain Jewish Pet of the Week is “Oliver,” a loyal, loving poodle mix who was adopted by Denver native Norman Chandler from a local dog shelter.

“He fell in love with me immediately (which none of the other dogs did), and I knew that he was the one,” Norman recalls.  “I brought him home and told him that this was going to be his new life and he has been with me ever since.”

Oliver’s photo and complete story are featured at www.MishPAWcha.com.  JNF and Radio Chavura will proudly plant a tree in Israel in Oliver’s honor.

Each week, JNF and Radio Chavura will recognize a new Rocky Mountain Jewish Pet of the Week, and Jewish families throughout the Rocky Mountain region can honor or memorialize members of their own MishPAWcha™ by planting trees in Israel in their pet’s name.

The concept for MishPAWcha™ was inspired by Ron Werner, current board president of JNF’s Mount States region, who – along with his partner, Jim Hering –  recently donated a grove of 1,000 trees in Israel.  Ron and Jim made the contribution in remembrance of their three cherished rescue dogs, Shimshon (Sam), Zacharaya (Zach) and Lucy. (See the May 29th Boulder Jewish News article on their donation.)

“What a wonderful way to thank Hashem for the blessing of our pets by contributing to JNF and its vital mission,” says Maxwell Rotbart, who co-hosts the weekly Radio Chavura program along with his father, Dean.  The Rotbart Family has contributed to JNF in memory of their three departed dogs, Duke and Pasha,  German Shepards, and Tikvah, a Golden Retriever.

For a minimum tax-deductible donation of only $36, JNF and Radio Chavura will post a photo of your dog, cat or another honored pet at www.MishPAWcha.com.  This is not only a perfect way to mark pet birthdays and adoption anniversaries, but also just to say, “I love you” in the universal language of giving.

One pet each week will be selected from those photos received to be recognized as the Rocky Mountain Jewish Pet of the Week.  Each pet of the week will be showcased online as well as in the weekly edition of Radio Chavura’s e-newsletter and program guide.  (Subscriptions to the newsletter are available for free at www.SubscribeChavura.com.)

In addition, some of the most adorable pets will be featured in The Radio Chavura Magazine, a new publication that will be distributed for free beginning in late August to more than 15,000 members of the Colorado Jewish community.

“We invite everyone whose life has been enriched by the love of a pet to share their photo and story with us all,” says Boaz Meir, JNF’s Mountain States regional director.

While the MishPAWcha™ celebration is new, Boaz notes that many Jewish pet lovers the world over have combined their love of pets and their love of Eretz Yisrael for many years by planting trees in honor or memory of their four-legged family members.

To participate in MishPAWcha™, email your pet photos and stories to: RadioChavura@gmail.com.  Please include a high-resolution digital photo and your contact details, including a phone number.

Those who pledge a minimum of $36 to JNF will be guaranteed that their pet will be recognized on the MishPAWcha™ website.  Each pet will also be eligible for consideration as the Rocky Mountain Jewish Pet of the Week.

Pet photos, stories and donations may also be mailed to JNF at 6000 E. Evans Avenue, Suite 1-200, Denver, Colorado 80222.  Be sure to include the word “MishPAWcha™” on your check, made payable to Jewish National Fund.

Please note that the volunteers at JNF and Radio Chavura will post new photos to the MishPAWcha™ web page as expeditiously as possible, but it may take a couple weeks or longer from the time we receive your photo, story and donation until we are able to showcase your pet.  We appreciate your patience.

Dean Rotbart, a Pulitzer Prize nominated former columnist and editor at The Wall Street Journal, is co-host of Radio Chavura, a weekly program focused on Colorado's vibrant Jewish community. The show is co-hosted by Dean's son, Maxwell, a recent graduate of Metropolitan State University of Denver. Radio Chavura can be streamed from www.Chavura.com or downloaded from the iTunes store.
Previous July Diary of an Israeli – Part 2
Next Adventure Rabbi Expands Into Online Learning