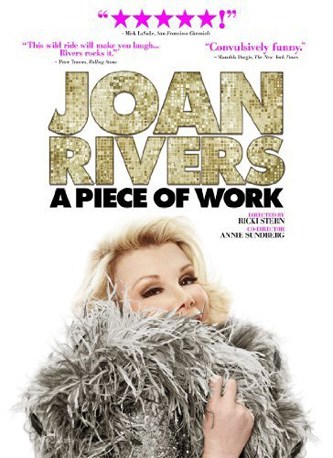 Can We Talk? “Joan Rivers: A Piece of Work” In 2010, the late great Roger Ebert reviewed “Joan Rivers: A Piece of Work,”  which premiered at the San Francisco International Film Festival, played at Tribeca, and earned high critical praise:

I think “Joan Rivers: A Piece of Work” is fascinating and has a lot of laughs in it. It’s more than that. It’s the portrait of a woman who will not accept defeat, who will not slow down, who must prove herself over and again. A brave and stubborn woman, smart as a whip, superbly skilled. You want to see what it looks like to rage, rage against the dying of the light? Joan Rivers will not go gentle into that good night.”

Joan Rivers z”l passed peacefully, albeit tragically, after slipping into a coma following minor surgery on September 4. Still, Ebert correctly observed that Rivers’ raging against the dying of the light is admirably recorded in this revealing look at a ground-breaking Jewish comedienne fighting to hold her place in a male-dominated industry driven by youth and beauty. Born Joan Molinsky in Brooklyn in 1933, the future actress, comedian, writer, producer, and television host began performing in clubs in Greenwich Village in the ‘60s, where she refined her acerbic wit into a comedic persona the country came to love. Her big break came on “The Tonight Show” in 1965, where her tough-talking broad persona found favor in a rapidly changing culture. Rivers has said she developed her caustic, satiric style after seeing fellow Jewish comic Lenny Bruce perform. “Joan Rivers: A Piece of Work” follows Rivers for 14 months, in her 76th year, creating an intimate portrait of a fearless woman who broke all the rules, defied all conventions, and lived to perform. It is far from a hagiography. Like the iconic woman herself, the film is brutally honest. Joan wouldn’t have had it any other way.

Monday, September 29 at 7:00 pm at the Boedecker Theater, Dairy Center for the Arts. Click here for tickets.

Kathryn has spent her professional life writing about, teaching, and presenting the arts. Founding Director of the Boulder Jewish Film Festival, Kathryn was Director of Menorah and ACE at the Boulder JCC from 2003 through August, 2019. The former film and theater critic for the Boulder Daily Camera, Kathryn is the author of "The Fifty Greatest Jewish Movies" and "The Fifty Funniest Films of All Time." kathryn.bernheimer@gmail.com
Previous Construction for the Boulder County Center of Judaism Has Begun
Next 100 Years of Community Foundations: Accomplishments and Challenges