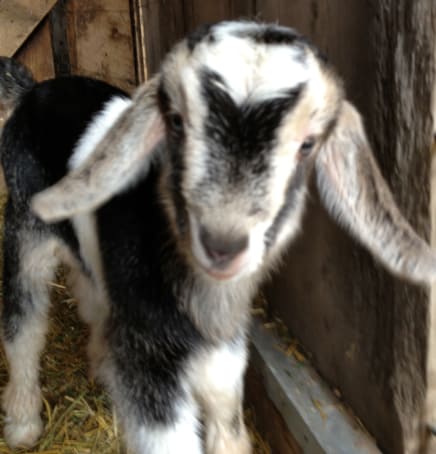 A Live Goat in the Tent on Yom Kippur

Rabbi Marc Soloway October 7, 2014 Guests and Blogs Comments Off on A Live Goat in the Tent on Yom Kippur The ark was open and I was just giving my typical spiel about this opening being a mystical opportunity to open our hearts and minds, especially on Yom Kippur when the gates of heaven are open too!  From the back, there was a commotion as two people and a live goat were rushing through the center towards the bimah.  “Rabbi Marc, Rabbi Marc,” came the cry from Ru, “something so strange happened.  We went to the edge of the wilderness and stumbled upon this live goat about to fall off.  What can it mean?”  “Perfect timing,” I replied.  “We are just at that point in our Yom Kippur service where we are all going to put our sins on to a goat and cast her away!  Who here is ready to lay their hands on this goat and transfer all of their sins to her?”  “Now wait a minute!” said Ru, “you’re asking us to do what?  How would you feel if someone tried to put all their sins on to you!  She’s just a sweet, innocent goat.”  I lifted up the goat in my arms and walked around with her a little bit and asked the congregation who liked the idea of this ritual.  A few did, but most did not.  By this time, there were a whole group of children of all ages gathered at the front and there was a little interaction with them about the whole idea.  And with that, she left us and I spoke a little of the whole concept of scapegoat that is derived from the Yom Kippur ritual of antiquity.  The whole thing only lasted a few minutes and then we continued with our Torah service and read the passage from Leviticus chapter 16 that describes the ritual of the priests, the people and the goats, while the smell of our live goat was still lingering in our ‘tent of meeting.’

Our High Holidays services this year were in a massive tent in our synagogue’s parking lot, having so recently returned home after the devastation of last year’s flood.  As we began our Yom Kippur services in 2013, our beloved shul was literally drowning under at least five feet of water and many of our members were dealing with their own chaos.  For various reasons, we decided to gather and celebrate in the big tent this year, and it was a wonderful way to bring community together.  On Kol Nidre, I spoke about living our Judaism in all four worlds, referring to the Kabbalistic worlds of action, formation, creation and emanation that are seen as physical, emotional, mental and spiritual.  When I spoke about Olam Assiyah, the World of Action, physical experience, I spoke about our need for a more embodied Judaism and alluded to just how visceral was ancient Jewish ritual, where you smell and touch the sacred rites in a way that has been lost.  Sure there is a kind of spiritual drama that can be evoked from the chanted and reenacted words on the page of the Machzor, but at times, it feels like the People of the Book need to look up from the book and reconnect to the spaciousness of our physical environment.  The JOFEE (Jewish Outdoors Food and Environmental Education) report that came out this year, reminded us of something that many of us already knew; that younger Jews are so much more engaged in a Judaism that encompasses their physical environmental education.  So, the fact that we have Beit Izim, a Jewish goat co-op, right across the street from Bonai Shalom on the Boulder Jewish Commons; that we were in this magnificent tent, and that we read all about goats on Yom Kippur, made it seem obvious to me to bring in a live goat to our service.

Bob and Ru, who serve as caretakers of the land, were a bit skeptical at first, but eventually bought the idea and Ru and I spoke just a couple of hours before Yom Kippur began and worked out a very vague plan for an improvised moment of Torah theater.  The goat, the newest in our herd, was born last Purim and is called Vashti and she played her part very well.  Some mystical commentators point out that the full Hebrew name for Yom Kippur is Yom HaKippurim, which can be translated as “the day like Purim!”  Perhaps, little Vashti was wearing a mask and reminding us of this connection; that in some redeemed future this day of fasting might be transformed to a day of feasting.  Either way, no one in my community will forget the Yom Kippur when a live goat came into our tent and participated in our service.  It was a tangible reminder of our need to live Jewish lives where we get our hands dirty and where lived experience can take us out of the pages of book, and real smells can transport us back into the past to make our present more alive.

Marc is a native of London, England where he was an actor and practitioner of complimentary medicine before training as a rabbi in London, Jerusalem and Los Angeles. He was ordained at the Ziegler School of Rabbinical Studies at the American Jewish University in 2004 and has been the the spiritual leader at Bonai Shalom in Boulder ever since. Marc was a close student of Rabbi Zalman Schechter Shalomi and received an additional smicha (rabbinic ordination) from him in 2014, just two months before he died. He has been the host and narrator of two documentary films shown on PBS; A Fire in the Forest: In Search of the Baal Shem Tov and Treasure under the Bridge: Pilgrimage to the Hasidic Masters of Ukraine. Marc is a graduate of the Institute of Jewish Spirituality, a fellow of Rabbis Without Borders, has traveled to Ghana in a rabbinic delegation with American Jewish World Service and co-chair of the Rabbinical Council and national board member of Hazon, which strives to create more sustainable Jewish communities. In 2015, Marc was among a group of 12 faith leaders honored at The White House as “Champions of Change” for work on the climate. Marc is a proud member of Beit Izim, Boulder’s Jewish goat milking co-op.
Previous ADL Welcomes Attorney General’s Action to Allow Same-Sex Marriages in Colorado
Next Eli and Jacob Stoken B’nai Mitzvah