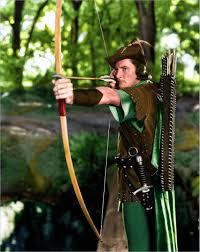 Is Robin Hood Jewish? Was he really Reuben Hood? Not exactly, but there are strong Jewish ties to this legendary hero, who may or may not have been based on a real person (thought to be Robert of Locksley, a Saxon lord.)

In the earliest references to this character, 38 English ballads that all date his birth as 1160, Jews are frequently mentioned along with “other outlaws.”  The Jews were expelled from England in 1290, making their outlaw status official.

The historian Joseph Hunter (“The Search for Robin Hood,” 1852) traces the connection between Robin Hood and the Jews to a pub in Nottingham at the corner of Jews’ Lane. This alehouse was known to be frequented by Jews, and in thirty-seven of the thirty-eight ballads, Robin Hood appears in that pub drinking with the outlaws, renegades and Jews.

In subsequent literary accounts of Robin Hood’s exploits, he’s repeatedly described as a friend of enemies of the Church and Jews. In Sir Walter Scott’s “Ivanhoe” (1819), Robin Hood helps the Jewish moneylender and his daughter Rebecca, who help to get Richard back on the throne.

In the 1938 film classic, “The Adventures of Robin Hood,” the swashbuckling hero is portrayed by Errol Flynn – who turned out to have Nazi connections. Also ironically, the evil Sheriff of Nottingham is portrayed by Basil Rathbone, a Russian Jew. Rathbone’s nose and dark complexion were to fill the Nottingham stereotype, in which the villains always looked a little ethnic. Historically, the real sheriff (1182-1203), tried three times to massacre the Jewish community in Nottingham because of a disagreement he had with a certain Jewish moneylender.

(The Mel Brooks comedy “Robin Hood: Men in Tights” parodies Friar Tuck as “Rabbi Tuckman,” a self-described “purveyor of sacramental wine and mohel extraordinaire,” played by Brooks, reprising a gag from Blazing Saddles in which the writer/director made a cameo as a Jewish Native American.)

But back to 1938, when Hitler was pursuing his goal of world domination and Jewish annihilation.  Jewish composer Erich Wolfgang Korngold had declined the offer to create the score for “The Adventures of Robin Hood” and had decided to return to his native Austria. News of the Anshluss reached him just before he departed, so he was spared certain death and the cinema gained an Academy Award-winning score. Korngold embraced the project that saved his life, and imbued his score with protest against Nazism. The love theme of Robin and Marian went on to become a celebrated concert piece.

The film’s Academy Award-winning director, Michael Curtiz (“Casablanca”), was also a Jewish refugee who had fled Europe in 1926.

The American Film Institute placed “The Adventures of Robin Hood” on its list of 100 best films of all time, and ranked the film score 11th in its listing of the 100 best film scores.

Audiences are invited to experience the film before hearing the score performed on the opening night of the Colorado Music Festival. In addition, Menorah is presenting “Hollywood Sound: Music for the Movies,” an in-depth look at the role Korngold and other Jewish composers played in the Hollywood heyday.

“The Adventures of Robin Hood”

“Hollywood Sound: Music for the Movies”

“The Sound of the Movies: Masters of the Film Score”

Free talk in the tent with Kathryn Bernheimer at 6:30 pm
Sunday, June 30, 7:30 pm
Chautauqua Auditorium
$60 for Section A seats and Gala Reception
Reservations required by June 14 from the Boulder JCC.

Kathryn has spent her professional life writing about, teaching, and presenting the arts. Founding Director of the Boulder Jewish Film Festival, Kathryn was Director of Menorah and ACE at the Boulder JCC from 2003 through August, 2019. The former film and theater critic for the Boulder Daily Camera, Kathryn is the author of "The Fifty Greatest Jewish Movies" and "The Fifty Funniest Films of All Time." kathryn.bernheimer@gmail.com
Previous Allie Blank and Anna Hirsch B’not Mitzvah
Next “The Attack” Previews at the Boe