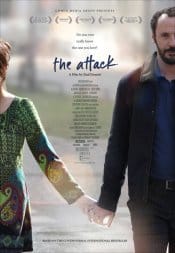 “The Attack” Previews at the Boe

Staff June 2, 2013 Arts & Culture Comments Off on “The Attack” Previews at the Boe Gathr Films presents a preview screening of Cohen Media Group’s “The Attack” at the Boedecker Theater at the Dairy Center, Monday night June 3rd at 7:00 pm.

Amin Jaafari is an Israeli Palestinian surgeon, fully assimilated into Tel Aviv society. He has a loving wife, an exemplary career, and many Jewish friends. But his picture perfect life is turned upside down when a suicide bombing in a restaurant leaves nineteen dead, and the Israeli police inform him that his wife Sihem, who also died in the explosion, was responsible. Convinced of her innocence, Amin abandons the relative security of his adopted homeland and enters the Palestinian territories in pursuit of the truth.

“The Attack” is adapted from Yasmina Khadra’s international bestseller of the same name. Originally published in 2005, the novel has been translated into more than 40 languages and has won numerous awards worldwide.

The film has screened at several film festivals and will officially comes to theaters June 21st.

They call me "NewsHound IV," because I'm a clever Finnegan, sniffing out stories all over the Boulder area. I love Jewish holidays because the food is GREAT, especially the brisket. Well all the food. I was a rescue pup and glad to be on the scent!
Previous Three Ways to Enjoy Robin Hood
Next Magda Korda z”l