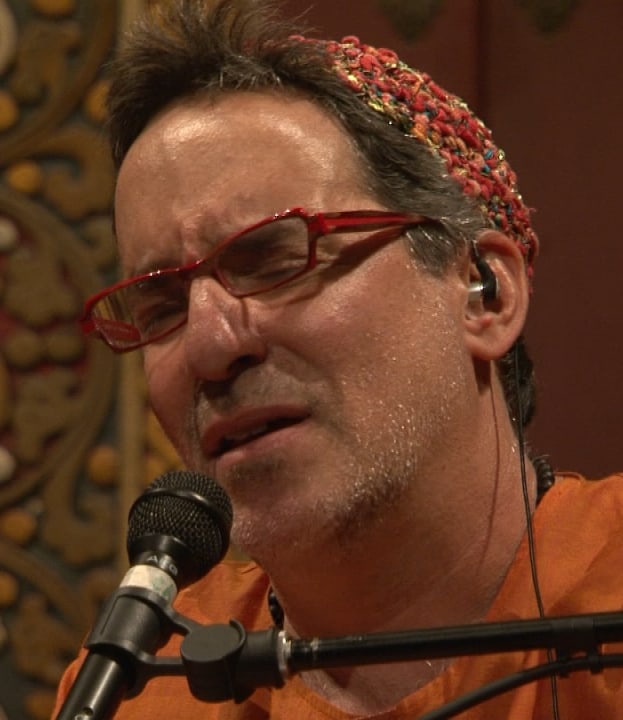 Congregation Bonai Shalom will host Rabbi Andrew Hahn, Ph.D., (Kirtan Rabbi) in concert on March 3, 2013, co-sponsored by Congregations Nevei Kodesh and Pardes Levavot.   Kirtan Rabbi’s music is characterized by great energy, passion and melodic flow. He combines a variety of tools to introduce Jewish Wisdom to an increasingly global, religious village.   Rabbi Andrew Hahn holds a  Ph.D. in Jewish Thought from the Jewish Theological Seminary (Conservative) and received rabbinic ordination from the Hebrew Union College-Jewish Institute of Religion (Reform). He has also studied at the feet of Rabbi Zalman Schachter-Shalomi, founder of the Jewish Renewal Movement. Dubbed “a Shlomo Carlebach for the twenty-first century,” he weaves traditional Jewish liturgy and musical modes into the increasingly popular call-and-response chant technology from India, known as Kirtan.

His main vocation is to make Torah accessible, deep and fun, — to Jew and non-Jew alike — in a way that is participatory and memorable. David Leipziger Teva, Rabbi and Director of Religious and Spiritual Life at Wesleyan University, recently wrote to Rabbi Hahn, saying, “You have enlightened our community in countless ways. I am envisioning your coming back every eighteen months or so. We should not let students graduate without being exposed to your Torah.”

Kirtan Rabbi will perform on Sunday March 3 at 7:00 pm at Congregation Bonai Shalom, 1527 Cherryvale Rd., Boulder.  Tickets are $10 in advance and $15 day of show. Tickets can be purchased at http://kirtanrabbiatbonaishalom.brownpapertickets.com.

Marc is a native of London, England where he was an actor and practitioner of complimentary medicine before training as a rabbi in London, Jerusalem and Los Angeles. He was ordained at the Ziegler School of Rabbinical Studies at the American Jewish University in 2004 and has been the the spiritual leader at Bonai Shalom in Boulder ever since. Marc was a close student of Rabbi Zalman Schechter Shalomi and received an additional smicha (rabbinic ordination) from him in 2014, just two months before he died. He has been the host and narrator of two documentary films shown on PBS; A Fire in the Forest: In Search of the Baal Shem Tov and Treasure under the Bridge: Pilgrimage to the Hasidic Masters of Ukraine. Marc is a graduate of the Institute of Jewish Spirituality, a fellow of Rabbis Without Borders, has traveled to Ghana in a rabbinic delegation with American Jewish World Service and co-chair of the Rabbinical Council and national board member of Hazon, which strives to create more sustainable Jewish communities. In 2015, Marc was among a group of 12 faith leaders honored at The White House as “Champions of Change” for work on the climate. Marc is a proud member of Beit Izim, Boulder’s Jewish goat milking co-op.
Previous Local Artist Releases EP: Glass and Gold
Next Week in Review: February 15th, 2013