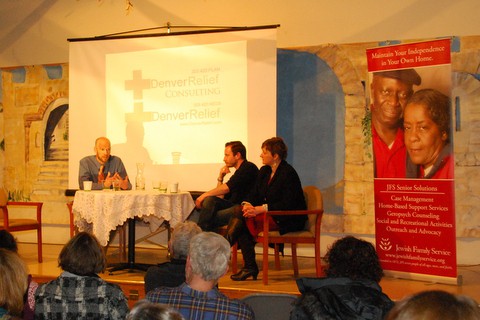 Ean, an active young member of the Denver Jewish community (Federation, ADL, JCC/E3 events) is a pioneer in the medical marijuana business in Colorado.  He described his journey from a home delivery operation to opening one of the first store-fronts in the state in 2009.  He spoke passionately about the medical benefits of marijuana, and how he entered the industry primarily to help people, and to destigmatize marijuana use.   He provided a slide show tour of his facility, introducing the uninitiated to each room in the dispensary, and each product they sell (from dried plant buds, to vaporizers, baked goods, mints, cannabis butter, and high potency extractions (hash)).

He described the different types of marijuana (sativa and indica) and the varying intensity, aromas and qualities offered by different strains (pain relief, relaxation,  sleep inducement, creativity boost, mental stimulation, anti-nausea, appetite enhancement, etc.).  Denver Relief has won many awards for the quality of their operation and their product (especially “Bio-Diesel”—they grow all of their own weed), and has been widely covered in the media including by “60 Minutes,” the Wall Street Journal, NPR, the BBC, and most of the major TV networks.   His team members are active philanthropists, organizing food drives, fundraisers, and donating hundreds of hours of volunteer time to worthy causes.

Brian Vicente, an attorney with Vicente Sederberg LLC talked about the unlikely passage of Amendment 64, which made Colorado one of the first two states to legalize recreational marijuana use.  As a coauthor of this legislation, and a legal advisor for seven years to many who work in the field, he was extremely well informed about the facts and laws pertaining to the industry.   He expects that the legalized sale of marijuana in Colorado will look a lot like the current medical distribution outlets, but on a larger scale.  He explained that by regulating the industry, while overall usage in Colorado has gone up, usage by teens has decreased.  He also described how moving the sales from street corners and alleys to regulated store fronts has made the transactions much safer, the quality much more consistent, and youth accessibility more limited.

Under the new legislation, tax revenues are expected to average $60 million a year for the first five years, and more thereafter, with the first $40 million each year earmarked for new school construction.   He said that this was basically money that was coming out of the pockets of cartels and going to the public good.   A little known aspect of the new Colorado legislation is that it also made Colorado the first state to legalize the production of hemp, the non-psychotropic cousin of marijuana that is used for food, fuel, and fiber, among other things, around the world.  Since its production is outlawed in the US, we currently import $400 million worth each year.  This creates a tremendous economic opportunity for Colorado farmers to grow this crop, which also has many sustainability advantages.

Betty Aldworth moderated the discussion, particularly the question and answer session which focused heavily on the potential health risks of marijuana use.  The panelists indicated that no one had ever died form a marijuana overdose, and that usage was much safer than alcohol.  While a major study indicates that there is not a noticeable negative health impact on adults, sustained usage by teens leads to an average drop of 8 points (8%) in IQ, but it was pointed out that this study did not control for economic and social factors.   Betty quipped that the biggest danger of using marijuana is getting caught, as the legal penalties and economic consequences can be quite harsh.

Marijuana has been illegal at the federal level in the US since 1937, and for political reasons, was classified with the most highly controlled (Schedule 1) substances.  This classification prevents pharmaceutical research into the positive aspects of the substance in the US.  Interestingly, one of the leading locations for such research is Israel, where medical marijuana is actively prescribed, including for PTSD.  One research objective is to isolate the medical benefits from the psychotropic aspects of the drug.  This would allow those seeking pain relief to obtain the medical benefits without affecting their mental functioning (or appetite, wakefulness, etc.)

Kudos to Cathy Summer at JFS (yes, I am not an objective source) and to Kathryn Bernheimer at the JCC for putting together an outstanding program.

Steve Ellis is the founder and president of Colorado Capital Management, and an active volunteer in the Jewish community.
Previous Female Filmmakers Rock the Boulder Jewish Film Festival
Next Midrash Before the Rabbis: Stories of Parents and Children