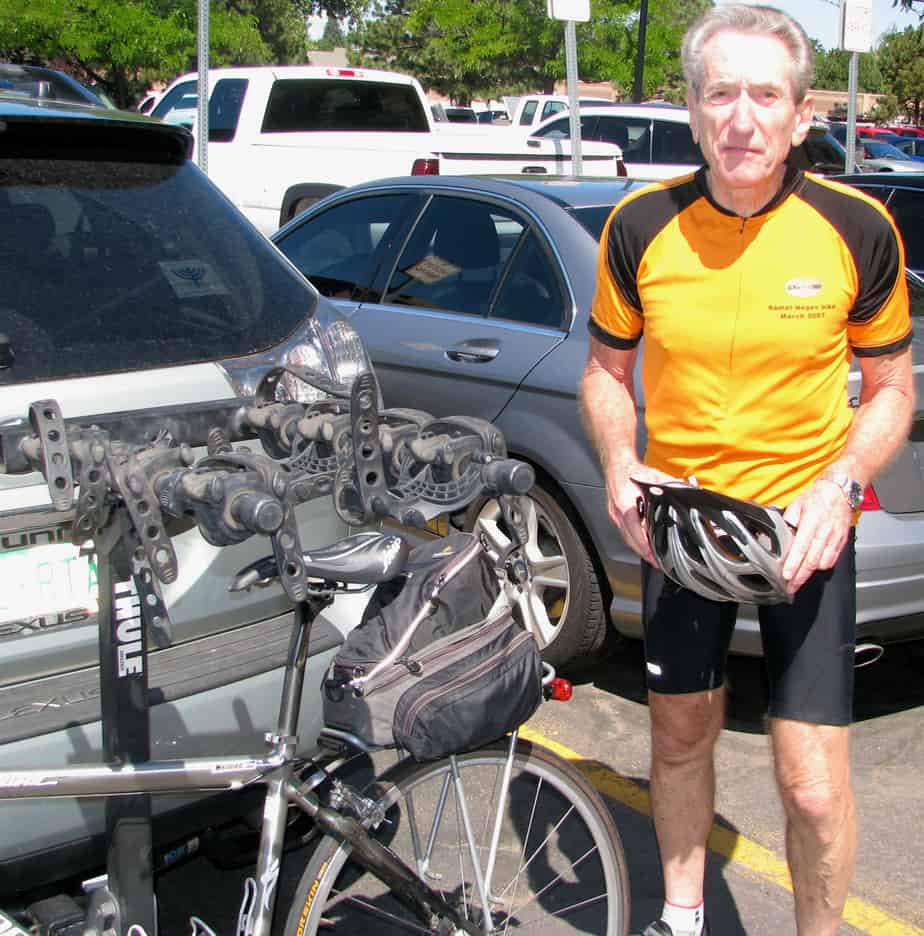 Ahead of his fundraising ride, Dr. Herzl Melmed poses with his bike and riding gear.

Colorado Physician, 76, to Bike 500 Miles for Israeli ‘Kids Under Fire’

Physically fit bikers, even those in their late seventies, are far from uncommon in pedal-conscience Boulder.

Dr. Melmed, 76, a Denver gynecologist, is currently biking alone from Bandon, Oregon to hilly San Francisco with only his wife Hazel and a few rotating companions following in a trail car.

His goal is to raise funds to purchase bicycles and support bike clubs for Israeli children who live under the perpetual threat of rockets fired from the Hamas-controlled Gaza Strip.

During a pre-trip interview, Dr. Melmed, who has the lean, muscular physique of an accomplished cyclist, says he plans five hours of intense riding each day, from August 6th through August 13th. His one concession to being a septuagenarian, he says, is that rather than camp outdoors at night, he’ll stay in local motels.

The doctor, who made fitness a priority when he turned 40, more than three-and-a-half decades ago, has previously logged more than 15,000 miles on his Specialized Sequoia bicycle and helped raise a total of about $75,000 for children in Israel.

Dr. Melmed is the founder of ActionIsrael, a Colorado-based, non-profit that relies on grassroots campaigns and empowered volunteers to engage in pro-Israel advocacy programs.

Four years ago, at the suggestion of his wife and other ActionIsrael members, Dr. Melmed helped launch the fundraising effort, officially known as “Biking For Kids Under Fire.”

There is something about kids on a bicycle becoming confident of their skills and their ability, and to reclaim the territory in which they live, rather than be hiding in air raid shelters,” says Dr. Melmed.

Relying primarily on local Colorado talent, Biking for Kids Under Fire has produced a moving 12-minute video, available on YouTube, showcasing the kids and communities who are the beneficiaries of ActionIsrael’s efforts.

Chillingly, the video illustrates how each family in the affected communities – where more than 13,000 potentially deadly rockets have already landed – regularly conducts drills so that adults and children alike can locate and reach omnipresent community and school bomb shelters in fewer than 15 seconds.

“It’s really a terrorist tactic,” says Dr. Melmed, who helps to narrate the video. “Firing at civilian populations in order to terrify those populations. And it does cause tremendous damage [and] tremendous anxiety.”

In the interview, Dr. Melmed confirms that many of the Israeli children suffer from post-traumatic stress disorder. Getting them on bikes, outdoors, is both entertaining for them and therapeutic, he adds.

The route that Dr. Melmed has charted for his 500-mile journey is both challenging – because of its ubiquitous hills and – at times – narrow roadways, and inspiring. The path tracks the coastline for many miles, but also weaves inland through tiny towns and past the towering forests that make the region so distinctive.

Dr. Melmed says he eschews listening to music or audiobooks while on his bike, preferring to be optimally attentive to the sounds of nature – and, importantly – to traffic hazards.

ActionIsrael and Biking for Kids Under Fire is asking community members to sponsor Dr. Melmed, based on a per-mile rate. At 10 cents per mile, for example, a donor would be pledging a total of $50. Contributions are tax-deductible.

Dr. Melmed is posting along his journey on Facebook’s Biking for Kids Under Fire page. Donations, payable to ActionIsrael, may be mailed to P.O. Box 18040, Denver, 80218.

While his journey will be physically arduous, Dr. Melmed is upbeat and confident of his ability to complete the mission. After all, there is – as he notes – a lot joy and comfort for deserving Israeli children riding on his shoulders.

Dr. Melmed was a guest last Sunday on Radio Chavura, hosted by Maxwell and Dean Rotbart.  The weekly show, airing at 6:30 pm on 990 KRKS AM in Denver, celebrates Colorado’s vibrant Jewish community.  Hear Dr. Melmed’s interview, as well as all previous editions of the program, here.

Dean Rotbart, a Pulitzer Prize nominated former columnist and editor at The Wall Street Journal, is co-host of Radio Chavura, a weekly program focused on Colorado's vibrant Jewish community. The show is co-hosted by Dean's son, Maxwell, a recent graduate of Metropolitan State University of Denver. Radio Chavura can be streamed from www.Chavura.com or downloaded from the iTunes store.
Previous Free Hadassah Family Fun Event at the JCC
Next Week in Review: August 9th, 2013