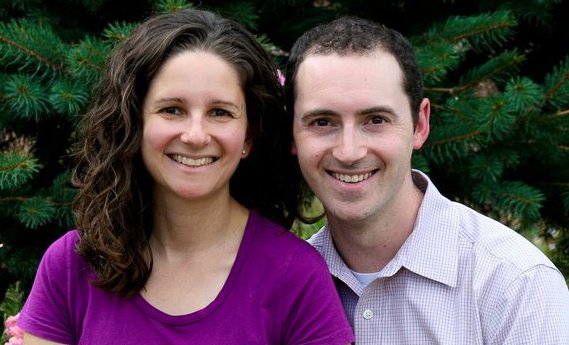 The top-level meeting was held in the Tumble Room of the Boulder JCC. Karli and Danny Sherwinter had been summoned to meet with BJCC executive director  Jonathan Lev and Adam Sirkus, the BJCC’s board president at the time. Since the Sherwinters had their young children with them, the four adults talked while Kayla and Reuben tumbled.

“We thought they were going to ask us to serve on a committee or run a program,” Danny recalls. “We were shocked and surprised when they asked us to be honored at  Reflections.”

It’s fitting that the Tumble Room was the setting for the Sherwinters’ invitation to be this year’s “Rising Stars,” along with “Bright Stars” Audrey and Andy Franklin.

“We love the Tumble Room,” Karli says. “We’re there all the time and we have all our kids’ birthday parties there.”

It’s also fitting that the Sherwinters were chosen to be honored by the Boulder JCC, which has become a second home for the family since they moved here in 2005.

“We grew up at our JCCs,” Karli explains. “I was in the JCC plays and attended the JCC camps. So from the beginning we felt comfortable at the Boulder JCC.”

The Sherwinters met in 2000, when they were both college seniors. Karli, who attended CU, went on a Birthright trip with Wendy Aronson, now the JCC assistant director. “We were singing all the time on the trip, and when we got back Wendy invited me to sing with her Jewish a cappella group at Hillel.”

Karli attended a Jewish a cappella conference in Chicago, where she met Danny, a senior at Washington University who was also there with his group.

After graduating, Danny got a job in St. Louis, while Karli was awarded a Fulbright fellowship to study in the Philippines and then a Bronfman fellowship that took her to Washington, D.C.

Following a courtship delayed by distance, the couple married and moved to Boulder, where Karli became the Hillel program director and Danny graduated from law school and began working as a patent lawyer. Kayla was born in 2007 and Reuben was born in 2009, and the family became even more deeply immersed in Jewish life.

“Our kids probably know more than we do,” Karli says of her children. “Havdalah dance parties are Rueben’s favorite thing.”

While Karli’s Birthright trip was the catalyst for her deep involvement in Jewish life, Danny had discovered a strong Jewish connection when he attended a program in Israel between high school and college. When he came back he decided to continue keeping kosher and observing Shabbat.

“I just kept going, and am still going,” he says of his deepened commitment to Judaism.

For Karli, all roads led to the Boulder JCC. As program director of Hillel, she came to the JCC in a professional capacity to collaborate on programs. As a founder and first employee of Limmud, Colorado, she quickly became friends with board director Mark Loewenstein, whose wife Linda Loewenstein was the JCC’s executive director at the time.

When Kayla was born, Karli started attending PAL classes and Shalom Baby programs and then enrolled her in the preschool.

“We made a ton of friends right away,” she says. Karli applied for a grant to start a Havurah for families with young children and invited everyone she met to join. Much to her surprise, many of the families most interested in participating were previously uninvolved in Jewish life.

The Sherwinters also like to have guests for Shabbat and to host large holiday celebrations, and are always searching out people who are not otherwise connected to the Jewish community.

Karli is currently busy planning the Purim Carnival for the second year, along with Jodi Basch. She also has been active introducing the national Ayeka “spiritual tune-up” program to Boulder.

Danny was a founder of the Jewish CSA, and the couple has become increasingly involved with Hazon, attending the national food conference as a family.

They are currently members of Bonai Shalom and associate members of Aish Kodesh. “And we go to Har HaShem whenever there’s a kids event we like,” Karli adds. “We do a lot of shul hopping.”

Although they were surprised to be honored at Reflections, they say that there has been an even more unexpected response from other young families they know.

People tell us they are so happy that someone they know is being honored, someone they feel they have something in common with. They are excited because they know us, and we’re like them.”

Danny says he’s also excited about the honor because of the timing. “This is such an exciting time for the JCC. It isn’t just another year. It feels amazing because of what’s happening as the plans for the new JCC have become concrete. It’s even more of an honor.”

“I’m also excited that Karli is being honored. It can be thankless of spend hours creating programs, from being the visionary to being the one who takes care of all the logistics. If it’s done well no one knows you are doing it.”

The Sherwinters believe that people who are already engaged in Jewish life should take responsibility for creating programs that serve their needs and the needs of people like them.

They are happy to serve as an example. Although it takes some juggling – Danny rushes home from Talmud class so Karli can attend a board meeting – they prove that even busy young families can make a difference in their communities. And be honored for it.

Kathryn has spent her professional life writing about, teaching, and presenting the arts. Founding Director of the Boulder Jewish Film Festival, Kathryn was Director of Menorah and ACE at the Boulder JCC from 2003 through August, 2019. The former film and theater critic for the Boulder Daily Camera, Kathryn is the author of "The Fifty Greatest Jewish Movies" and "The Fifty Funniest Films of All Time." kathryn.bernheimer@gmail.com
Previous This Week for CU’s Jewish Buffs
Next More Thoughts on the Situation in Beit Shemesh