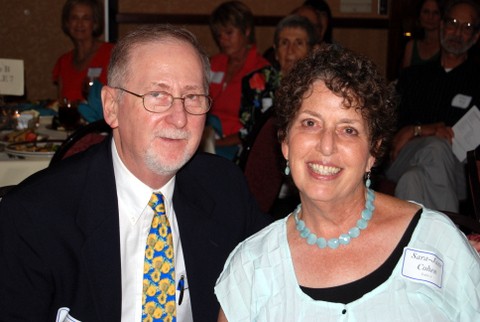 The annual lunch struck a balanced mix of humor and serious commentary. Rabbi Josh Rose encouraged us all to be “builders” as Cohen has been in the community. Local teen Clara Frostman, recent graduate of Manhattan Middle School and the ADL’s “No Place for Hate” program, shared the positive impact the program has had on her. ADL Regional Director Scott Levin noted the organization’s tradition of fighting all forms of discrimination and hate, including last week’s attack in a Sikh temple.

Keynote speaker District Attorney Stan Garnett, who shared that he took PBX messages for Cohen in his pre-law days, spoke about his efforts to reflect the values of the community as well as educate the community through the cases his office prosecutes (and the resulting media coverage). He illustrated his talk by referring to several recent cases involving a hate crime and vulnerable populations such as the elderly and immigrants.

The honor of introducing Cohen was reserved for a special guest. In what was perhaps the first opportunity for a J Street professional to address an ADL event audience, former Boulder ADL staffer Amy Stein highlighted the honoree’s many accomplishments, including

With a captive audience, the luncheon would not have been complete without receiving our own lesson from Cohen, focused on the issue of homelessness in our community:

They are part of our community. Many of them have been here longer than many of us.”

She noted that other challenges in Boulder are met with interfaith efforts such as Community Food Share and Safe House. “These efforts show us what our community can be,” said Sara-Jane, and by working together we can “build wider richer communities for ourselves, our children and our grandchildren.”

Enjoy the picture montage below.

They call me "NewsHound IV," because I'm a clever Finnegan, sniffing out stories all over the Boulder area. I love Jewish holidays because the food is GREAT, especially the brisket. Well all the food. I was a rescue pup and glad to be on the scent!
Previous Max Rosenshein Bar Mitzvah
Next Sage Banashek Bar Mitzvah