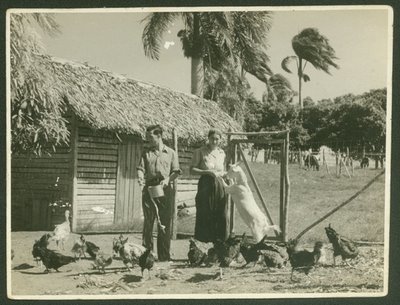 Barbara Steinmetz will share the story of her childhood, spent in a rare and unlikely refuge from the Holocaust, at noon on Thursday at the Boulder JCC. In the Older Adults – Not Just for Seniors program, Barb will also talk about her recent trip with her family to the much-changed Jewish haven. The cost of the lunch and learn program is $8; reservations are appreciated and can be made by calling 303-998-1021.

In 1938, when no other nation would welcome Jewish refugees, Rafael Trujillo, the Dominican Republic strongman, offered to take in 100,000. Between 1940 and 1945, 5,000 Dominican visas were issued, but only 645 Jews actually made their way to the Dominican Republic. The refugees settled in the tiny seacoast town of Sosua, then just jungle land, that Trujillo had established with funding provided by the American Jewish Joint Distribution Committee.

Upon arrival, every new Jewish settler was given 80 acres of land, 10 cows, a mule and a horse. Although most of the settlers were German or Austrian Jews and had professional or craftsmen’s backgrounds, they quickly picked up the agricultural life offered by Sosua and established a successful Jewish cooperative that today produces most of the county’s meat and dairy produce.

Trujillo’s generosity probably stemmed mainly from his eagerness to have the Western nations overlook his brutal massacre of 25,000 Haitians in 1937, and his desire to “whiten” his race. He believed that the young European men would marry Dominican women and produce light-skinned offspring. He was correct in this in that most settlers were single young men who did marry Dominican women. The children usually considered themselves Jewish and many stayed in Sosua.

Today, only about 30 of the original Jewish families remain in Sosua. By the 1940’s, most of the nearly 700 inhabitants had moved to either New York or Miami. Although no longer in the Dominican Republic, the Sosua Jews have maintained a tight-knit community. Until 1980, the town was still entirely Jewish; however, with the opening of the international Puerto Plata airport four miles west of Sosua, the village has turned into a major beach resort.

Today the town has 3,000 full-time residents, with about 70 Jews. Those who did remain in Sosua and held onto their land, have made a fortune. Erik Hauser, an original settler from Vienna, now owns an entire block of the lucrative downtown area, where hotels and restaurants were built on his original 80 acres. He is Sosua’s wealthiest resident.

Sosua has one functioning synagogue that holds services every other Shabbat and on the High Holidays. Passover Seders are held in community members’ homes and an annual Purim carnival is a major community event. The small Jewish community also has a museum dedicated to preserving the history and story of the town’s original Jewish settlers.

Kathryn has spent her professional life writing about, teaching, and presenting the arts. Founding Director of the Boulder Jewish Film Festival, Kathryn was Director of Menorah and ACE at the Boulder JCC from 2003 through August, 2019. The former film and theater critic for the Boulder Daily Camera, Kathryn is the author of "The Fifty Greatest Jewish Movies" and "The Fifty Funniest Films of All Time." kathryn.bernheimer@gmail.com
Previous Boulder Lights the Menorah
Next Light Up in Louisville