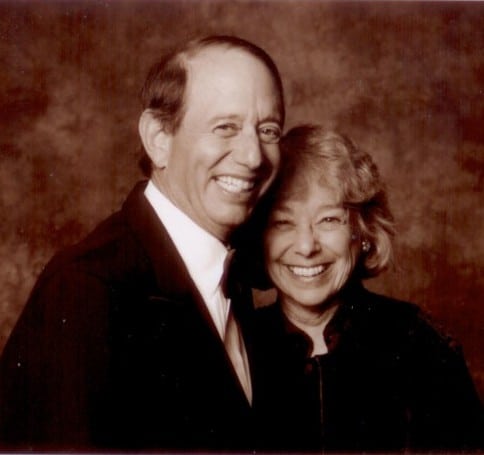 Franklins To Be Honored at Reflections

When asked how they met, Audrey and Andy Franklin laugh sheepishly and glance at each other. It seems there are two versions of the story.

They agree that they met “après-ski” in Vail during the terrible snow season of 1976-77. But according to Andy, Audrey was brazenly flirtatious, even though he was there with a date. Audrey insists her overture to Andy was quite innocent.

It hardly matters who made the first move. What matters is they married in 1978 and that skiing has remained the couple’s abiding passion.

Andy was already living in Boulder when he met Audrey, who was living in Denver at the time. He had made aliyah to the mountains with the sole intention of being a ski bum. Almost unintentionally, he got a job at HP in Loveland as an electrical engineer in product R&D.

“I came here from Atlanta as quickly as I could to ski. I didn’t mean to get a job,” he recalls during an interview in their gracious Wonderland Hills home with sweeping views of the mountains they love.

When their son Sam was born in 1981, the Franklins joined Har HaShem and Audrey became active in the fledgling Jewish community. Andy, who grew up in the highly assimilated Reform Jewish community of Atlanta, was less Jewishly engaged in those early years leading up to his son’s Bar Mitzvah.

But when the Franklins went on a Federation mission to Israel with other B’nai Mitzvah families – including Mark and Jackie Wong, Ardee Imerman and Peter Berntsen, and Francine Lavin Weaver – Andy had a transformative experience.

It was my first trip to Israel and it was life-changing,” he explains. “It made me connect to the Jewish part of me. There was a sense of community, not just with the other families, but with Israelis and the Jewish people. I felt part of the Jewish community locally and globally for the first time.”

After the transformative trip and his son’s profoundly meaningful Bar Mitzvah, Andy allowed himself to “get sucked into Federation by my friends, especially Karyn and Richard Schad.”

Audrey notes that Andy possessed practical skills, such as knowing his way around a spreadsheet, that were extremely useful to Federation and the other Jewish and non-Jewish organizations he became involved with. He was Boulder campaign chair for a number of years and remains active with Federation as well as the AJC, where he serves on the executive committee.

Meanwhile, Audrey was diligently volunteering her time establishing new Boulder Jewish agencies. She served on the board of Boulder Action for Soviet Jewry and joined the  Boulder steering committee of ADL, where she currently serves on the board. Recently she launched the Boulder Jewish Oral History Project.

Together the Franklins have served on numerous Har HaShem committees and worked on various congregational fundraising efforts.

These are just some of the organizations touched by the Franklins’ generous hands. Audrey was honored with the Pacesetter Award for her exemplary work in the community.

Andy observes that there’s a theme that runs through Audrey’s extraordinary list of commitments, and that is an interest in bettering the lives of marginalized and immigrant populations, dating back to the Hmong families in Sam’s early school days.

“She has always worked to make our community more welcoming, more open and inclusive and engaged,” he says. “She has always cared deeply about the disadvantaged.”

Despite their long list of accomplishments and the inestimable impact they have made on the Jewish community, this is not the first thing people in the community mention when the Franklins’ name comes up. More often it is the Franklins’ warmth that causes friends to speak with such affection and to describe the Franklins as “a lovely couple.”

Audrey does not enjoy being in the limelight, and feels humbled to be singled out for recognition. “We are just people who say yes when asked. We’re worker bees. But we aren’t the visionaries,” Audrey says modestly. “I’m a Vermonter. I don’t enjoy the attention. I just like to help.”

While Andy does not seek the limelight, and is equally modest, he is much more comfortable accepting recognition. “I am truly honored and flattered. The appreciation is really very nice,” he says. “I am very happy to play my part. And we’re very happy to do what we can for the JCC.”

Although the Boulder JCC has not been the focus of the Franklins’ energy, they both express deep appreciation for the role it has played creating Boulder’s thriving community and recognize how vital it is to our future.

Most people came her from long-established communities,” Audrey notes. “But our generation is lucky to have had the opportunity to create and transform this community. People with vision and passion have made that happen for us, and they still are.

“I always say that you could do something Jewish every night of the week,” she adds, picking up the spring Movers postcard on the coffee table as one example. “It’s stunning what has been created in Boulder.”

The Franklins may not want to take much credit for their role in creating the amazing community they love, but they do credit each other, frequently touting each other’s virtues as they talk.

Such a lovely couple indeed.

Kathryn has spent her professional life writing about, teaching, and presenting the arts. Founding Director of the Boulder Jewish Film Festival, Kathryn was Director of Menorah and ACE at the Boulder JCC from 2003 through August, 2019. The former film and theater critic for the Boulder Daily Camera, Kathryn is the author of "The Fifty Greatest Jewish Movies" and "The Fifty Funniest Films of All Time." kathryn.bernheimer@gmail.com
Previous Capitalism, Socialism….Judaism?
Next Week in Review: January 20th, 2012