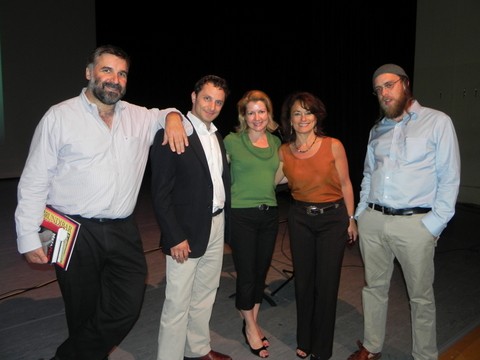 Four Rabbis Walk Into a Theater…

Rabbi Tirzah Firestone of Congregation Nevei Kodesh moderated a preview for the Colorado Music Festival’s staging of “Brundibar,” a Holocaust-era children’s opera with a heavy back story, at the Dairy Center in Boulder on Thursday night.

The program began with a brief history of the opera and a showing of a “60 Minutes” clip from 2007 about the role “Brunidbar” played in the Nazi’s “show camp” deception of the Red Cross at the Theresienstadt concentration camp near Prague, Czechoslovakia in June, 1944.

Then Colorado Opera Program Director Leigh Holman talked about the upcoming production, and introduced three of the performers, who staged segments from the first part of the show.

Finally, Rabbi Tirzah moderated a discussion with a panel made up of Rabbi Marc Soloway of Congregation Bonai Shalom, Rabbi Josh Rose of Congregation Har HaShem and Rabbi Gavriel Goldfeder of Kehilath Aish Kodesh.  The rabbis discussed the play, the Maurice Sendak/Tony Kushner book and recent productions of “Brundibar” and the the nature of art, Torah, “Maus“, “The Night Kitchen,” good and evil, and how to teach one’s children about evil in the world at different ages.

The three speculated about the level of intended subversiveness in the story, given that it was written before Hitler took over Czechoslovakia but saw almost all of its productions staged inside a Nazi concentration camp. They compared the evolving use and interpretations of “Brundibar” to the different interpretations of Torah stories through the ages, as well as the different illustrations of the four sons in the Haggadah.

They also discussed the ending postscript that Tony Kushner added to the book version, published in 2003, that made it clear that while the children succeeded in banishing the bully Brundibar at the end of the original story, Brundibar was still around and would return; a decidedly different ending message for children than the original.

On June 28th and 29th, Colorado Music Festival will present this timeless story that unites kids and their animal friends against the town bully. Ela Weissberger, a Holocaust survivor who, as a young child, performed the role of The Cat while in Terezin, will travel to Colorado to be a part of this production.  During her stay in Boulder, Ms. Weissberger will share her life story and participate in several events for our community. Click here for tickets.  For more information about the Rediscovered Masters Program or tickets, visit www.comusic.org.

You can read more about the production in these prior BJN articles:

I've been writing things since grammar school, and served as a writer, photographer and/or an editor on my junior high and high school newspapers; the Daily Trojan at USC (where I earned my journalism degree); the student newspaper at the Anderson School at UCLA (where I earned my MBA); and written and edited countless business documents and presentations in the ensuing twenty years. I've been involved Jewishly since my bris and in Boulder since 1995. I'm married to my Executive Director Cheryl, and we have two children, Lauren and Ethan.
Previous 100 Convos – May Wrap-up
Next Week in Review: June 8th, 2012 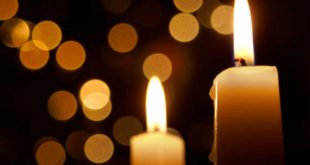 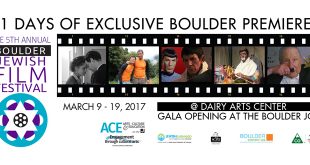 What the Boulder Jewish Film Festival Gets Right