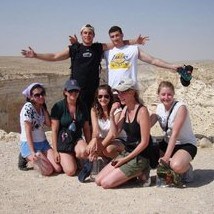 Assimilation. Anti-Semitism. Secularism. Intermarriage. Geographical dispersion and loss of community. Diminished attachment to Israel. These are but a few of the challenges to Jewish continuity that caused alarm in the Jewish community in the 20th century.

How could we strengthen Jewish identity for the next generation and rekindle their love for Israel at the same time?

Yossi Beilin, Justice Minister of Israel in 1994, had an idea. It was radical. It was expensive. It was risky. But the potential payoff was enormous.

The idea was to offer young Jews, age 21-26, a free 10-day tour of Israel. The idea was Taglit-Birthright, founded in cooperation with philanthropists Charles Bronfman and Michael Steinhardt, as well as the Israeli government, other private philanthropists, the Jewish Agency for Israel, and Jewish communities around the world.

Today, more than 300,000 young Jews have been on Birthright. An overwhelming number of participants describe the experience as transformative, life-changing, a once in a lifetime opportunity to wrestle with their feelings about being Jewish and about Israel. Birthright is the single most ambitious and successful Jewish engagement program to have emerged in our lifetime.

Seth Kroll was an assistant tour leader on a trip of Boston. Armed with a video camera, he recorded the transformation unfolding around him. Later, he interviewed Bronfman, Steinhardt and Beilin, and took a deeper look at this $400 million phenomenon.

The result is “Mifgash: Encountering Jewish Identity in the 20th Century.”

Kroll comes to the Boulder JCC on Tuesday, February 21 for a 7:00 pm screening of his film, followed by discussion. The screening is free for students and Birthright alums.

The film does not shy away from the complexities of Birthright, portraying the wide range of experiences and widely differing attitudes that emerge as Bus 740 travels through the Jewish homeland with a group of young Jewish strangers and their assorted baggage.

It is fascinating, heartening and heartfelt, an experience not to be missed.

Kathryn has spent her professional life writing about, teaching, and presenting the arts. Founding Director of the Boulder Jewish Film Festival, Kathryn was Director of Menorah and ACE at the Boulder JCC from 2003 through August, 2019. The former film and theater critic for the Boulder Daily Camera, Kathryn is the author of "The Fifty Greatest Jewish Movies" and "The Fifty Funniest Films of All Time." kathryn.bernheimer@gmail.com
Previous Are Our Children Too Stressed Out?
Next Week in Review: February 17th, 2012