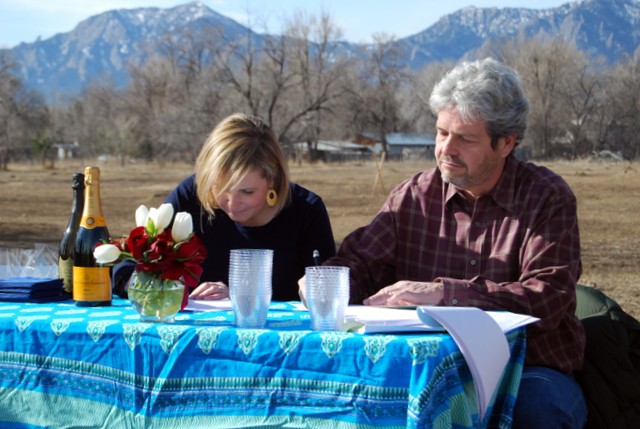 The Oreg Foundation (originally the Weaver Family Foundation) purchased a thirty acre parcel at the corner of Cherryvale and Arapahoe over a decade ago, with the intent that Jewish nonprofit agencies could establish a Boulder Jewish Commons on the site. The JCC will be the first organization to do so. The JCC has raised $16,600,000 towards its goal of $18 million to construct its new facility, has finalized its architectural plans, and has worked closely with the Oreg Foundation to work out the details of its future on the Boulder Jewish Commons site. Together, the JCC and the Oreg Foundation have begun to submit the JCC’s plans to the City of Boulder for zoning approvals. The land transfer agreement signed on February 2nd marks another step forward for the project, as the Oreg Foundation formalized its commitment to the JCC.

The JCC and Oreg Foundation will now work with the City of Boulder to seek the necessary approvals and permits for the project. The JCC will break ground after the city and permitting process and is dependent on the City’s timetable for approvals.

For more information about the JCC’s project, please see www.boulderjccbuilding.org

The JCC will break ground after the city and permitting process and is dependent on the City’s timetable for approvals.

Jonathan Lev, MPA, joined the Boulder JCC as Executive Director in 2010. He is a passionate educator and entrepreneur who combines his experience at Jewish summer camp and involvement with the startup of Boulder based Renewable Choice Energy to influence his leadership as a nonprofit executive and Jewish professional. He was certified as high school teacher and Summa Cum Laude graduate from the University of Colorado in Boulder. For more than six years, Jonathan was a leader in the field of Jewish summer camp where he worked to enhance the level of supervision and mentorship for both campers and staff through innovative summer and year-round trainings. In 2007, Jonathan continued his studies and was selected as a Taub Fellow at New York University in the dual-master’s degree program for a Master in Public Administration in Nonprofit Management and Master in Hebrew and Judaic Studies. Since starting his role in 2010 at the Boulder JCC, Jonathan has led the community's $30M capital campaign to build a new JCC campus, which opened in summer 2016. He speaks regularly about making philanthropy fun and the role that inter-generational giving has on creating a legacy. Outside of work, he and his wife, Lyndsay, and their daughters, Mira and Susanna, can be found hiking, skiing, practicing yoga, listening to music, and planning their next great adventure. Follow him @jonathanlev on twitter.
Previous Limmud Rabbi Smackdown – Video Update
Next Week in Review: February 3rd, 2012