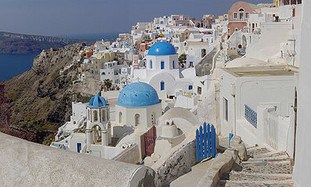 The word “opa” is the Greek equivalent of L’Chaim, used as a celebratory salutation. Unlike, “L’Chaim, which means “to life,” opa doesn’t really ‘mean’ anything. It’s an exclamation of joy, like “whoopee” or “hooray.” It is frequently used in conjunction with dancing and drinking.

The Jewish presence in Greece goes back at least to the times of Alexander the Great – come experience their rich culture, cuisine and history. The highlight of the evening will be a concert of Greek music by the band Sherefe. The evening will also include a short film about the Romaniote Jews, who have 2,000 years of history, and their own language, customs and traditions. Carlos Zarur, Menorah’s favorite teacher, will lead a discussion following the film.

Pre-registration is strongly recommended as this event fills the Boulder JCC. Tickets are $25 in advance; $30 at the door.

Kathryn has spent her professional life writing about, teaching, and presenting the arts. Founding Director of the Boulder Jewish Film Festival, Kathryn was Director of Menorah and ACE at the Boulder JCC from 2003 through August, 2019. The former film and theater critic for the Boulder Daily Camera, Kathryn is the author of "The Fifty Greatest Jewish Movies" and "The Fifty Funniest Films of All Time." kathryn.bernheimer@gmail.com
Previous Taste the Best Latkes in Town Sunday
Next Matisyahu Coming to Boulder Theater