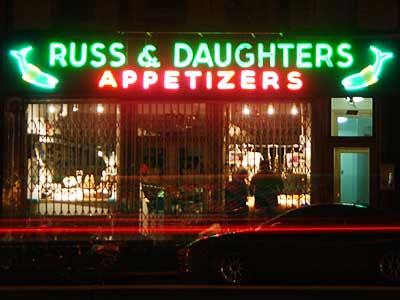 Q: What is Russ and Daughters?

Since 1914, this landmark New York institution has been continuously owned and operated by four generations of the Russ family. Joel Russ, an Eastern European immigrant who arrived in America in 1907, started the business from a pushcart to cater to the throngs of Jewish immigrants settling in New York’s Lower East Side. He began by schlepping Polish Mushrooms on his shoulders to support his family, and save enough money to purchase a pushcart. In the true spirit that defines the early 20th Century immigrants, Joel Russ soon was able to buy a pushcart, and expanded his operation and sold pickled herring and Polish Mushrooms. Then in 1914, Joel Russ opened J Russ International Appetizers, a storefront around the corner from the current location, thus the beginning of what would become the landmark Russ and Daughters is today.

Kathryn has spent her professional life writing about, teaching, and presenting the arts. Founding Director of the Boulder Jewish Film Festival, Kathryn was Director of Menorah and ACE at the Boulder JCC from 2003 through August, 2019. The former film and theater critic for the Boulder Daily Camera, Kathryn is the author of "The Fifty Greatest Jewish Movies" and "The Fifty Funniest Films of All Time." kathryn.bernheimer@gmail.com
Previous Week in Review: September 9th, 2011
Next Sasha Gordon and Avi Nataf B’nai Mitzvah