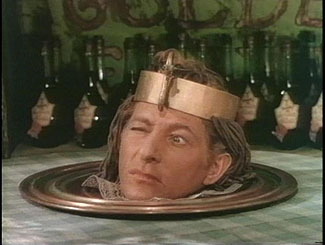 Kathryn Bernheimer May 11, 2011 Arts & Culture Comments Off on Danny Kaye, Gogol and Shakespeare When the Colorado Shakespeare Festival announced its 2011 season, one title caught my eye: “The Inspector General.”

The first thing I thought of was the hilarious 1949 screen version starring Danny Kaye (born David Daniel Kaminsky), which is very loosely based on Nikolai Gogol’s 19th-century masterpiece of dramatic satire. I knew we’d find a way to show the film in conjunction with the festival’s ambitious production. Indeed, Menorah is collaborating with the CSF and the Dairy Center for the Arts on two screening in the Dairy’s new Boedecker Theater on Sunday, June 26.

The second thing I noticed was that the CSF production – to be directed by Efim Zvenyatsky, esteemed artistic director of Vladivostok’s Maxim Gorky Theatre (the largest theatre in eastern Russia) – was being underwritten by a $40,000 gift from The Opaline Fund of the Jewish Community Endowment Fund in San Francisco.

So what’s the Jewish connection? For one, Efim Zvenyatsky is a Russian Jew. Gogol was not Jewish and “The Inspector General” is not a Jewish play. The screen adaption is not explicitly Jewish either, although its sensibility is entirely Jewish and its creators are Jewish. The classic comedy is directed by German Jewish refuge Herman Koster, who fled Germany in 1932 after he punched a Nazi SA officer who insulted him. (He proceeded to go directly to the railroad station and took the next train for France.) It was written by Harry Kurnitz and Philip Papp and features original music by Danny Kaye’s wife, Sylvia Fine, and Johnny Green.

Produced shortly after the Holocaust, this post-Nazi era film re-locates the story from the Russian Empire into an unspecified corrupt country that suddenly finds itself under the dictatorial supervision of the First French Empire. Its anti-tyrannical sentiments couldn’t be clearer.

Kaye plays a classic shlemiel in the movie, a sweet nobody who is traveling in a Gypsy medicine show. An act of honesty puts him in peril, and he is soon mistaken by corrupt town officials for the feared Inspector General expected to arrive in disguise. The officials plot to kill him before he can uncover their corruption, but of course justice prevails. The film features Danny Kaye’s classic shtick: physical comedy, idiosyncratic pantomimes, and rapid-fire nonsense songs. The celebrated American actor, singer, dancer and comedian left school at the age of 13 to work in the Borscht Belt, where he learned the basics of show biz. In 1940, his Broadway performance in “Lady in the Dark” brought him acclaim and notice from agents. Also in 1940, he married Sylvia Fine, who went on to create his routines and gags, and write most of the songs that he performed, including those in “The Inspector General.”

Samuel Goldwyn tried to sign Kaye to a movie contract for two years before he eventually agreed. Goldwyn put him in a series of Technicolor musicals, starting with “Up in Arms” (1944). His debut was successful, and he continued to make hit movies such as “The Secret Life of Walter Mitty” (1947). In 1954, he appeared with Bing Crosby in “White Christmas” (1954), which was based on the Irving Berlin song of the same name. In 1955, he made what many consider his best comedy, “The Court Jester” (1955), with the brilliant Pellet with the Poison routine. In 1960, he began doing specials on television and this led to his own TV series, “The Danny Kaye Show” (1963), which ran from 1963 to 1967. Some of his last roles were also his most memorable, such as an intense Holocaust survivor in “Skokie” (1981). He was the first ambassador-at-large of UNICEF and received the French Legion of Honor in 1986 for his many years of work with the organization.

Menorah: Arts, Culture and Education at the Boulder JCC is thrilled to honor Danny Kaye with the screenings and excited to be showing the film at the Boedecker Theater, a wonderful new venue. Menorah is also excited about collaborating with both the CSF and The Dairy.

For more information about the festival’s exciting summer plans for “The Inspector General,” please see the accompanying article.

“The Inspector General” screens Sunday, June 26 at 4 pm and 7 pm. I will lead talkbacks after both screenings, along with CSF artistic director Philip Sneed. Tickets are $9; $7 for seniors and students; $6 for Boedecker Theater members. Tickets are available in advance at www.thedairy.org or at the door.

Kathryn has spent her professional life writing about, teaching, and presenting the arts. Founding Director of the Boulder Jewish Film Festival, Kathryn was Director of Menorah and ACE at the Boulder JCC from 2003 through August, 2019. The former film and theater critic for the Boulder Daily Camera, Kathryn is the author of "The Fifty Greatest Jewish Movies" and "The Fifty Funniest Films of All Time." kathryn.bernheimer@gmail.com
Previous Major Cultural Exchange Planned by CSF
Next Sherlock Cohn: It’s Elementary