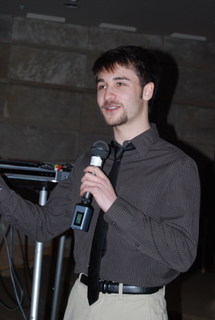 Finding Peace Outside of Words

Lauren Fellows December 21, 2010 Arts & Culture Comments Off on Finding Peace Outside of Words

“Music expresses that which cannot be put into words and cannot remain silent.” –Victor Hugo

I attended an excellent movie the other night. It was filmed and produced by Amitai Gross, son of Reb Victor and Reb Nadya Gross, and a friend of mine from BBYO back in the day. It was funny seeing him again after a few years, and not just because I barely recognized him with the short hair and beard. It was because somehow I knew he’d find a way to blend music and Tikkun Olam.

His documentary “Music in the Key of Peace”, though rough around the edges, was an excellent film. In it Amitai captures four neutral organizations geared towards coexistence in Israel, all of them using music as their medium for bringing Jews and Arabs together.

Most of the time, when you hear about Middle East peace groups, their orientation is pretty clear: for Israel or for Palestine. They want to end the conflict but favor one side over the other. (That seems a bit pointless, don’t you think?)

Of course, there are also neutral groups, both here and abroad: groups whose aim is not for either side to win, but for both of them to just get along; an antidote to incitement on both sides. However, even in neutral groups there is a looming hurdle, and that hurdle is language. How can the two sides ever hope to coexist if there’s limited understanding between them?

This is where the ideas of people like Amitai are important. Music is the perfect bridge because it is something that is universally understood. For instance, I listen to a lot of Japanese music–while I don’t understand half the words, I can still connect to the feeling behind the music. That’s what makes Music in the Key of Peace and other similar projects so powerful. If the feeling is peace, then music is the best way to communicate that feeling because it can go outside of words and language to connect people on both sides of the divide.

Kudos, Amitai. I hope that someday your documentary has a wide audience and spreads the word that coexistence in the Middle East is possible.

More pictures of the event:

Music in the Key of Peace