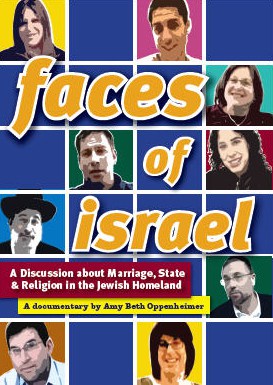 As we approach Yom Ha’atzmut (Israel Independence Day), join film maker Amy Beth Oppenheimer at Congregation Bonai Shalom Wednesday night, April 14th at 7:30 pm for a fascinating program exploring the complexities of Israeli society today. We will watch extracts of the movie “Faces of Israel” as well as discuss its themes.

What would it be like to live in a country that by definition does not make a distinction between synagogue and state?

Just decades ago, David Ben Gurion publicly declared “the establishment of a Jewish state…to be known as the State of Israel.” But what does it mean to be a Jewish state? Do these two characterizations, ‘democratic state’ and ‘Jewish state’, work well together? What happens when they don’t?

“Faces of Israel” explores the delicate balance between state and religion in the Jewish homeland through the context of marriage.

The documentary poses questions, such as:

“Faces of Israel” introduces the view of Israelis from a variety of backgrounds and beliefs who offer their own answers to these questions.

“Faces of Israel” has no political agenda. Rather, it serves as an educational tool that will foster dialogue and conversation about the important questions that face the Jewish people and the State of Israel today.

Powerful… Mature…Sophisticated…Honest” and “A Must See”

Marc is a native of London, England where he was an actor and practitioner of complimentary medicine before training as a rabbi in London, Jerusalem and Los Angeles. He was ordained at the Ziegler School of Rabbinical Studies at the American Jewish University in 2004 and has been the the spiritual leader at Bonai Shalom in Boulder ever since. Marc was a close student of Rabbi Zalman Schechter Shalomi and received an additional smicha (rabbinic ordination) from him in 2014, just two months before he died. He has been the host and narrator of two documentary films shown on PBS; A Fire in the Forest: In Search of the Baal Shem Tov and Treasure under the Bridge: Pilgrimage to the Hasidic Masters of Ukraine. Marc is a graduate of the Institute of Jewish Spirituality, a fellow of Rabbis Without Borders, has traveled to Ghana in a rabbinic delegation with American Jewish World Service and co-chair of the Rabbinical Council and national board member of Hazon, which strives to create more sustainable Jewish communities. In 2015, Marc was among a group of 12 faith leaders honored at The White House as “Champions of Change” for work on the climate. Marc is a proud member of Beit Izim, Boulder’s Jewish goat milking co-op.
Previous 8 Gluten Free Travel Tips
Next BJDS Yom Ha’Atzmaut Event