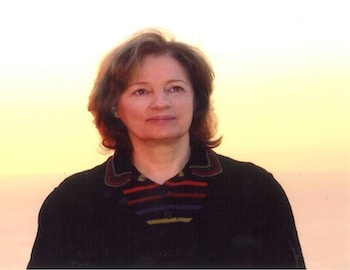 Wikipedia describes Susan Polis Schutz as “an American poet and producer of greeting cards and the mother of U.S. Congressman Jared Polis of Colorado.”

It does not list her most current avocation, filmmaker, although the Wikipedia entry does detail her 2007 film, Anyone and Everyone, which focuses on the experiences of parents of gay sons and daughters.

Wikipedia does list her date and place of birth, (Peekskill, NY, 1944) but does not note her hair color, which is bright blue.

Why blue? Blue has been a lucky color for Susan, who founded Blue Mountain Arts in 1971 with her husband Stephen as a vehicle for her poetry. The greeting card and poster company flourished along with Susan’s reputation as a poet. She has published several anthologies of poetry, including To My Daughter with Love on the Important Things in Life. Over 14 million books have been sold containing Susan’s poems.

In 1996, bluemountain.com was launched, becoming one of the first and most successful on-line greeting card companies and the 10th most-visited website in the world along with Yahoo and AOL.

Blue has been the color of good fortune for the Polis family. But that is not the only reason she dyed her hair blue.

Blue is also how Susan felt as she battled depression. It is a battle she won, and she hopes her own healing can provide guidance and hope for victims of this devastating afflication. More than 21,000,000 Americans are diagnosed with depression annually.

Susan shares her journey through depression and recovery in a poetic memoir, Depression and Back, and in her new film, “The Misunderstood Epidemic: Depression.”

The Boulder JCC will present a special screening of the documentary on Sunday, August 29 at 7 pm, with Susan Polis Schutz in person. Her son Jared Polis will introduce the film and his mother. Tickets are $5 at the door and there will be free babysitting for those who register in advance by calling Kathryn at 303-998-1021 or emailing kathryn@boulderjcc.org.

Spreading the word about depression is my mission,” Polis Schutz wrote in the Huffington Post in April. “I am working to build awareness, educate people about the symptoms, and change public opinion and individual attitudes about depression. It won’t be easy, but if more people understand depressed people, the easier it will be for them.”

She founded IronZeal Films three years ago to make “films that make a difference.”

Her first film focused on parents across the country discussing their experiences having a son or daughter who is gay. The documentary depicts families from all walks of life. Individuals from such diverse backgrounds as Japanese, Bolivian, and Cherokee, as well as from various religious denominations such as Mormon, Jewish, Roman Catholic, Hindu, and Southern Baptist, share intimate accounts of how their children revealed their sexual orientation and discuss their responses.

“The Misunderstood Epidemic: Depression” has been seen on PBS stations across the country and Susan has received an outpouring of letters. Her second film, “Following Dreams,” follows people who achieve what they want in life. Her next film will follow people in their 90s and 100s who are living extraordinary lives.

Click here to see Susan’s blue hair and read more about her in a Daily Camera article from May, 2010.

Kathryn has spent her professional life writing about, teaching, and presenting the arts. Founding Director of the Boulder Jewish Film Festival, Kathryn was Director of Menorah and ACE at the Boulder JCC from 2003 through August, 2019. The former film and theater critic for the Boulder Daily Camera, Kathryn is the author of "The Fifty Greatest Jewish Movies" and "The Fifty Funniest Films of All Time." kathryn.bernheimer@gmail.com
Previous BJN Workshop for Local Agencies
Next For Serious Cereal Lovers