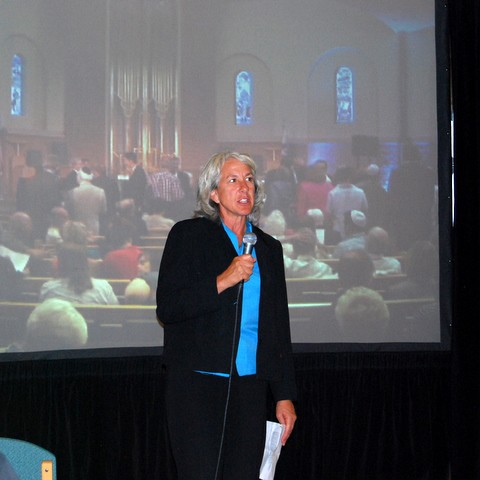 Joan Nagel welcoming the audience in front of the screen.

For something like 30 years, the National Council of Jewish Women, Colorado Section (NCJW), and the Jewish Community Relations Council (JCRC) both centered in Denver, have held a Candidates Forum for the Jewish community every two years.  For most of that time, the forum has been hosted by the Hebrew Educational Alliance in south Denver.  On Monday night, the Candidates Forum entered the 21st century by feeding the event live to Boulder in a parallel event hosted by Congregation Har HaShem that drew nearly 50 people on its inaugural run.

The first 45 minutes were a live, mingling, meet and greet between local Boulder candidates and representatives of state and Federal candidates as well as volunteers pitching for or against various state ballot measures.  A little after 7 pm, attendees were asked to take their seats in Har HaShem’s sanctuary in front of a large rear-projection screen, on which was playing a live video feed from HEA’s main sanctuary, where candidates for statewide and Federal offices were gathered in person.

Rabbi Josh Rose of Har Hashem and Karen Simpson, Boulder Manager of the Allied Jewish Federation of Colorado, welcomed the crowd, followed by Joan Nagler, who introduced the local state legislature candidates that were in attendance.  Then it was time for the main event from Denver, and Arlene Abady from the NCJW and Jackie Cooper Melmed, representing the JCRC introduced the event on screen.  After a prayer for our country, led by HEA’s Rabbi Dollin, it was time for Adam Schrager from 9News to take over as moderator.

Schrager proceeded to grill the candidates in attendance for statewide office and those seeking to represent Colorado in Washington on foreign and domestic policy issues, as well as political topics of interest to Jewish Coloradans.  Not surprisingly, the economy, Israel and Iran dominated the questioning. Despite the potential for high rhetoric, hysteria and extreme partisanship, all the candidates and the audience (both in Denver and Boulder) conducted themselves with the utmost respect and decorum.  As a result of both the level of questioning and the candidates successfully sticking to the questions being asked, it was a successful effort to differentiate the candidates and their positions on many issues of interest.

The video and audio feed seemed to go off without a hitch — the sound in particular was arguably better at Har HaShem then at HEA itself.  Kudos to Fastlane Productions of Denver for the quality of the presentation.  The BJN, along with many of the community members in attendance, hopes that the JCRC and the NCJW continue to include Boulder in future Candidate Forums.

Here is a slide show from the event: I've been writing things since grammar school, and served as a writer, photographer and/or an editor on my junior high and high school newspapers; the Daily Trojan at USC (where I earned my journalism degree); the student newspaper at the Anderson School at UCLA (where I earned my MBA); and written and edited countless business documents and presentations in the ensuing twenty years. I've been involved Jewishly since my bris and in Boulder since 1995. I'm married to my Executive Director Cheryl, and we have two children, Lauren and Ethan.
Previous The Key To Your Child’s Success
Next The Fruits of the Earth, Naturally Gluten Free