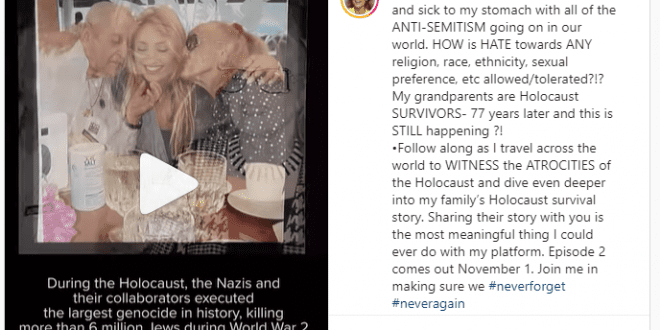 Staff October 27, 2022 News Comments Off on TikTok Holocaust Remembrance Series Reaches Over One Million Views in Less Than 24 Hours

NEW YORK – With Holocaust distortion and denial increasing by the day, especially on social media, Bnai Zion is taking a new approach to combat that narrative, through its partner, SoulShop.

Jewish influencer Montana Tucker, a TikTok sensation with 8.7 million followers, just launched a Holocaust Remembrance series called “How To: Never Forget.” Through the 10-part series on Tucker’s TikTok and Instagram, she retraces her grandparents’ steps through Poland during the Holocaust. Within 24 hours of launching the series, over one million viewers saw the premiere episode on both Instagram and Tiktok. Good Morning America also covered the debut of Tucker’s series on Wednesday morning.

This project, under the leadership of Rabbi Ari Lamm, was a collaboration between SoulShop, Bnai Zion, The Claims Conference, CharityBids and producer Rachel Kastner.

Starting November 1, leading up to the anniversary of Kristallnacht – the night of broken glass – Tucker will lead her audience through her own journey of exploration, where she learned about her family’s story of survival and the history of the Holocaust. Her 11 million-plus followers, mostly Gen-Z, will learn alongside her. One episode will be launched each day.

“I’ve always wanted to see first-hand what my grandparents experienced,” Tucker said. “It’s hard to understand exactly what they went through. Not only did I finally go see my grandparents’ home myself, but the fact that I can bring Holocaust education to others, is truly an exceptional opportunity.”

The award-winning singer/songwriter, dancer, actress and social media sensation has stood alongside music’s biggest names, such as Pitbull, Flo Rida, and Ashanti. With over 11 million followers across all platforms, including almost 3 million followers on Instagram, the “How To: Never Forget” initiative will be a unique way to engage her audience.

“We’re in an influencer-driven world, where people with enormous followings can reach a truly global audience,” Rabbi Ari Lamm, Chief Executive of Bnai Zion and President of SoulShop, said. “So that means Gen Z can imbibe the antisemitism of a Kanye at light speed. But it also means we can teach positive values and essential Jewish stories at the same scale, and with the same influence.

“That’s why we created this series with Montana. Because as the last generation of survivors passes away, we can’t settle for reaching the same old people with Holocaust education, and doing it piecemeal. We need to reach millions of young people with really compelling and authentic content, and we need to do it now. And I cannot tell you how proud and excited we are about the massive overnight success of this project.”

Kastner is a granddaughter of survivors herself. She has produced documentaries and digital series that aim to bring empathy and understanding to young viewers.

“It feels like we cracked a code,” Kastner said. “Instead of documentaries that Gen Z won’t sit down to watch, let’s bring them important stories in the ways that they consume any other content. While we were filming in Poland, I had a vision of a teenager scrolling through their social media and watching this because they were interested in Montana, and simultaneously being impacted and learning from her experience. That is the power of this project, and we’re seeing its working from the responses.”

During the trip, JRoots provided the logistical tour planning on the ground with tour guide Zak Jeffay.

SoulShop is a new media company focused on building community around content and product for next-gen audiences of faith.

Bnai Zion is an American nonprofit dedicated to strengthening Israel and the Jewish People through building partnerships with our people’s friends and allies across the globe. Since 1908, all the way through to today, Bnai Zion has been at the forefront of some of the most innovative projects in the Jewish world—from launching Magen David Adom, the Red Star of David, still the nation’s premiere provider of emergency medical services, to establishing Betzalel, to spreading great Jewish ideas and faith-driven entertainment through digital media.

They call me "NewsHound IV," because I'm a clever Finnegan, sniffing out stories all over the Boulder area. I love Jewish holidays because the food is GREAT, especially the brisket. Well all the food. I was a rescue pup and glad to be on the scent!
Previous Column: Trump’s Advice for ‘a Good Jewish Character’
Next Antisemitism Expert to Address Women in Denver Who Support Israel 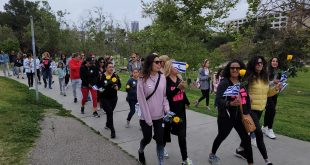