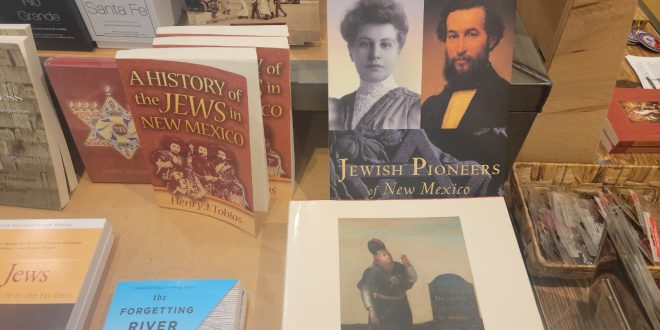 Kathryn Bernheimer October 13, 2022 Arts & Culture Comments Off on The Boulder Jewish Film Festival Takes a Ride into the Wild West

While visiting Sante Fe in April, we spent some time at the excellent New Mexico History Museum behind the Plaza, ending up, as we always do at the end of a museum visit, in the museum gift shop. There we were surprised and a little confused to find an entire table dedicated to the Jewish history of the area, including a dozen or more books on subjects such as “Jewish Albuquerque” and “The History of the Jews of New Mexico.”

“The Spiegelbergs of New Mexico: A Family Story of the Southwestern Frontier” provided a clue to the exhaustive Judaica display. On the wall, a plaque revealed that the shop, which helps fund the museum, was sponsored by the Spiegelberg family, which has had a continuous presence in Santa Fe since 1846, when Solomon Jacob Spiegelberg became the first Jewish merchant on the Sante Fe Trail.

I purchased a copy of “Pioneer Jews,” delighted by the coincidental discovery of research related to our closing night film, “Jews of the Wild West.” Who knew that this once wild land we live in was tamed by so many Yiddishe cowboys? It makes sense, however, that driven by desperation or daring, displaced Jews would seek their fortunes on the frontier along with other adventurers looking for a better life.  Still, the courage, creativity, and sheer persistence of these intrepid settlers is astounding, redefining our understanding of American history.

Every film finds its way into the festival be a different route. The minute I saw the title of this documentary about pioneering Jews, I knew it was a natural fit for us. And when I screened it, I was thrilled to find Colorado so heavily represented, and that it was as fascinating and lively as I hoped. When I learned the filmmaker, Amanda Kinsey, lives in Denver, it was clear “Jews of the Wild West” deserved special attention.

Kinsey will attend the closing night screening on Sunday, November 13 at 3:30 pm, as well as the Wild West Wrap Party following at 5:30. Bill Korn, who appears in the film and is an expert on the history of Leadville, will also participate in the Q&A.

The Wild West Wrap Party features Western swing music by Greg Schochet and Little America, and a down home supper of chili, cornbread and pie.

The day celebrating Western culture begins at noon in the Boedecker Theater with a family-friendly comedy classic, “The Frisco Kid,” in which a very young Gene Wilder plays a Polish rabbi traversing with Old West with an outlaw sidekick played by Harrison Ford.

A film festival provides a wonderful opportunity to learn together. I know audiences will enjoy discovering the colorful hidden Jewish history buried in the hills we call home.

Kathryn has spent her professional life writing about, teaching, and presenting the arts. Founding Director of the Boulder Jewish Film Festival, Kathryn was Director of Menorah and ACE at the Boulder JCC from 2003 through August, 2019. The former film and theater critic for the Boulder Daily Camera, Kathryn is the author of "The Fifty Greatest Jewish Movies" and "The Fifty Funniest Films of All Time." kathryn.bernheimer@gmail.com
Previous End the Holiday Season on a High Note!
Next Weekly Edition: October 14th, 2022