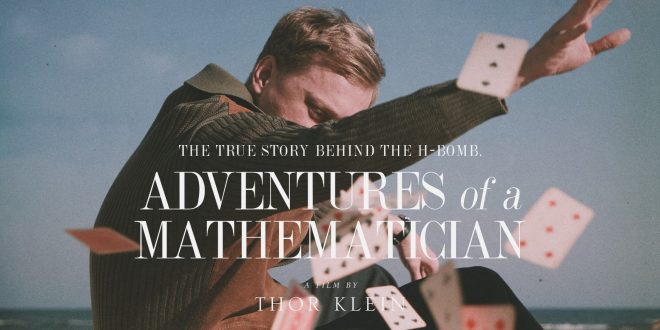 In April, while vacationing in Santa Fe, my husband and I spent an edifying day in Los Alamos, a remote New Mexico town that reverberates with history. One of the original stone buildings used by scientists working feverishly and secretly to stay one scientific step ahead of our enemies is now part of the museum complex.

In the humble stone cottage, there’s a glass case displaying Nobel Prize medals won by scientists who worked at Los Alamos during WW II. Right next to that is the door to the one-time office of Stan Ulam, a crucial figure in the work being done in these cramped, make-shift quarters high in the hills above Santa Fe. The desk Ulam sat at while working out mathematical equations for the development of the hydrogen bomb, and later the first computer, is now roped off.

And on a wall behind the desk is a movie poster, not from a movie from the 1940s, but from a brand-new feature film based on his 1976 autobiography, “Adventures of a Mathematician,” depicting the high-stakes drama and moral quandaries of the Manhattan Project, where Ulam was a key member of an elite group of scientists, mostly Eastern European Jews.

After two decades working in the post-war race for military technological superiority, Ulam became a professor of mathematics at the University of Colorado while still consulting at Los Alamos. He also taught at the University of Florida. He summered regularly in Boulder until his death in 1984 in Santa Fe.

The closing night film of the 10th annual Boulder Jewish Film Festival, “Adventures of a Mathematician” screens Sunday, November 13, at 6:30 pm in the Dairy Arts Center’s Gordon Gamm Theater. The festival’s Wild West Wrap Party precedes the screening in the Dairy Lobby from 5:30-6:30. Featuring western swing with Greg Schochet and Little America, and an old west dinner, the closing night reception follows the 3:30 screening of “Jews of the Wild West,” from Denver filmmaker Amanda Kinsey.

Written and directed by German filmmaker Thor Klein, “Adventures of a Mathematician,” is a German-Polish-British co-production, but most of the dialogue is in English. Philippe Tlokinski plays Ulam as a sensitive, principled, yet playful and perhaps even ambitious man drawn into world shaking events. The world of Los Alamos is evoked with fine period detail in Klein’s look at a rarefied universe where superhero scientists are charged with saving the world.

A Polish-born Jewish refugee, Ulam solved the problem of how to initiate fusion in the hydrogen bomb. He also devised the ‘Monte-Carlo method’ widely used in solving mathematical problems using statistical sampling. He was among the first to use and advocate computers for scientific research, originated ideas for the nuclear propulsion of space vehicles, and made fundamental contributions to many of today’s most challenging mathematical projects.

But “Adventures of a Mathematician” is neither a documentary nor a chronicling of Ulam’s accomplishments. Rather, it is a human drama about a man at the center of an international crisis, the story of an immigrant uniquely able to make a contribution to his adopted homeland by fighting the forces that drove him from Europe and decimated his people. It is the personal life story of the most significant and brilliant mathematician of his time.

Kathryn has spent her professional life writing about, teaching, and presenting the arts. Founding Director of the Boulder Jewish Film Festival, Kathryn was Director of Menorah and ACE at the Boulder JCC from 2003 through August, 2019. The former film and theater critic for the Boulder Daily Camera, Kathryn is the author of "The Fifty Greatest Jewish Movies" and "The Fifty Funniest Films of All Time." kathryn.bernheimer@gmail.com
Previous Book Your Next Event at Levin Hall
Next Experience Beth Ami’s Humanistic Rosh Hashanah and Tashlich Live