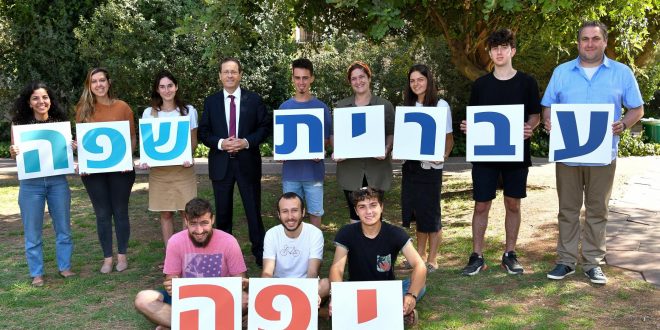 Isaac Herzog with Jewish Agency shlichim holding up signs that translate into "Hebrew is a Beautiful Language." Credit: Zoog Production

Jerusalem, June 29, 2021 — The Jewish Agency for Israel is launching a new program for innovative, informal Hebrew language education at summer camps throughout the Jewish world. The aim is to spark an interest and curiosity about Hebrew among Jewish kids and teens, and to deepen their familiarity with Israeli culture. The program will be launched this summer with the assistance of the Jewish Agency’s shlichim (emissaries) who will use Israeli songs, educational games, outdoor activities, sport, cooking workshops and more to provide campers with an introductory Hebrew vocabulary and familiarity with Israeli slang.

The program will run as a pilot for informal Hebrew education this summer at camps in the United States and France.  It was developed by respected academics who focus on informal Hebrew learning and the connection between language and society (sociolinguistics). The program was created with support from the Patrick & Lina Drahi Foundation and in collaboration with the Hebrew at the Center, which developed the educational content.

The Jewish Agency’s summer camp programming joins the extensive activities of the World Zionist Organization with formal Hebrew education and other bodies involved in furthering the Hebrew language among global Jewry.

“This innovative project aims to instill kids and teens with a curiosity about Hebrew and Israeli culture, by means of informal education. Hebrew is a living and vibrant bridge between the State of Israel and world Jewry, connecting our glorious past and our common future. It is the birthright of every girl and boy to learn the language common to us all.”

–Chairman of the Jewish Agency and President-elect of the State of Israel, Isaac Herzog

For Herzog, who will be sworn in next month as the 11th President of the State of Israel, the launch of this Hebrew language program is the perfect closure to his tenure as head of The Jewish Agency. In Herzog’s first speech as chairman three years ago at JFNA’s General Assembly, he presented his vision for instilling a connection to the Hebrew language among the younger generations.

“Hebrew and Jewish summer camp are two fundamental tools for strengthening Jewish identity and connection in a compelling and fun manner,” says Rabbi Andrew Ergas, CEO of Hebrew at the Center. “We are excited to partner with the Jewish Agency and the Drahi Foundation to launch this initiative.”

Angelina Drahi, Chair of the Patrick and Lina Drahi foundation Chairman said, “We believe in the power of the Hebrew language to connect the younger generations to our people and to Israel and are delighted to see this important program launch this summer. The incredible content and wonderful shlichim are sure to create meaningful Hebrew experiences.”

About The Jewish Agency for Israel:
Since 1929, The Jewish Agency for Israel has been working to secure a vibrant Jewish future. It was instrumental in founding and building the State of Israel and continues to serve as the main link between the Jewish state and Jewish communities everywhere. This global partnership has enabled it to address the Jewish People’s greatest challenges in every generation. Today, the Jewish Agency connects the global Jewish family, bringing Jews to Israel, and Israel to Jews, by providing meaningful Israel engagement and facilitating Aliyah. It also strives to build a better society in Israel – and beyond – energizing young Israelis and their worldwide peers to rediscover a collective sense of Jewish purpose. The Jewish Agency continues to be the Jewish world’s first responder, prepared to address emergencies in Israel, and to rescue Jews from countries where they are at risk. Learn more at jewishagency.org.

They call me "NewsHound IV," because I'm a clever Finnegan, sniffing out stories all over the Boulder area. I love Jewish holidays because the food is GREAT, especially the brisket. Well all the food. I was a rescue pup and glad to be on the scent!
Previous Column: War And Pieces: The Shape of Teachers’ Anti-Israel Drive
Next 4 Questions for Ali Roth of “Ali Roth Writes”