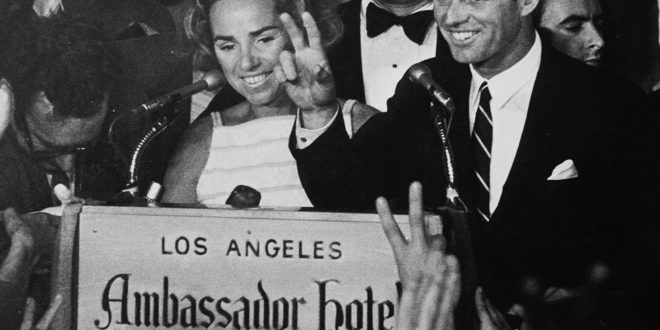 Bruce Ticker September 9, 2021 Guests and Blogs Comments Off on Column: Parole for Sirhan B. Sirhan? RFK’s Help for Israel Drove His Assassin

During his 1968 presidential campaign, Robert F. Kennedy proposed sending 50 military planes to Israel. Two decades later, Sirhan B. Sirhan revealed that RFK’s support of Israel motivated him to fatally shoot RFK in the pantry of a Los Angeles hotel on June 5, 1968.

Five months from now, the 77-year-old Sirhan may join his Palestinian brothers in freedom as a released prisoner. Sirhan, who is being held at a prison near San Diego, can thank two California parole commissioners for recommending last Friday that he be freed on parole after serving more than a half-century of a life sentence.

During a television interview in 1989, the Jerusalem-born Sirhan said he felt betrayed by Kennedy’s Israel proposal. The assassination occurred a short time after Kennedy, a senator from New York, delivered a victory speech upon winning California’s Democratic presidential primary.

“The prisoner killed my father because of his support of Israel,” former U. S. Rep. Joseph P. Kennedy II wrote in response to the recommendation, according to The San Francisco Chronicle. “The man was tried, convicted and sentenced to death. Yet he now may walk free, no doubt to the cheers of those who share his views. Let there be no mistake, the prisoner’s release will be celebrated by those who believe that political disagreements can be solved by a gun.”

Joseph Kennedy also wrote of other aspects of his father’s assassination, including its impact on his family.

Sirhan was lucky to receive the life sentence. He was initially sentenced to death, over the objections of RFK’s younger brother and Senate colleague Edward M. Kennedy. Sirhan’s punishment became a life sentence when California’s top court temporarily ruled against the state’s death penalty in 1972.

Many Americans can think of a few compelling reasons why Friday’s recommendation should be rejected. First, the parole board’s legal division must review it in a process that could take four months. If Sirhan gets past that step, Gov. Gavin Newsom will have 30 days to review the matter, and then he can approve, veto or return it to the parole board, or do nothing and allow it to go into effect, The New York Times reported.

RFK’s backing of Israel intermingles with a slew of other issues arising from the prospect of Sirhan’s release, the subject of a virtual hearing last Friday. Sirhan’s hostility toward Israel is a crucial reason for keeping him forever isolated from society. It extends beyond the horrid act of murder and even the shock that a prominent elected official was slain.

RFK’s assassination was motivated by enmity for an American ally whose diplomatic relationship was just starting to develop, and has grown into an essential partnership. If Sirhan is allowed to walk, then others who seek to murder for political issues can expect to avoid serving their full sentences.

Politicians who take controversial positions – as they all must sooner or later – can feel intimidated if they know that assassins will receive this kind of treatment.

An early release for Sirhan cannot compare so easily with Arab terrorists who have been allowed to step out of Israeli prisons as part of lopsided prisoner exchanges. Many are still young and not stuck in prison for long periods. He still has an opportunity, as limited as it may be, that should have been closed to him from the outset.

RFK’s nine children are divided. Joseph Kennedy and five siblings issued a joint statement that they were “shocked by a ruling” which they believe ignores standards for paroling “a confessed, first-degree murderer in the state of California,” The Los Angeles Times reported.

Robert F. Kennedy Jr., who has questioned if a second gunman might have shot his father, wrote to the parole board that he believed his father would encourage Sirhan’s release because of his “impressive record of rehabilitation,” according to The Philadelphia Inquirer.

Douglas Kennedy said at Friday’s hearing that he was “grateful today to see him as a human being worthy of compassion and love,” as quoted in The New York Daily News.

Among his comments to the parole commissioners, Sirhan said, “I will always look to safety and peace and nonviolence…I can be a peacemaker, and a contributor to a friendly nonviolent way of resolving the issue.”

Couldn’t RFK have been “a peacemaker” had he lived?

Bruce S. Ticker, who writes from Philadelphia, also blogs for The San Diego Jewish World and Smirking Chimp and previously for the suspended Philadelphia Jewish Voice. He was previously a reporter and copy editor for daily newspapers in eastern Pennsylvania.
Previous Weekly Edition: September 10th, 2021
Next Celebrate a Day of Attunement