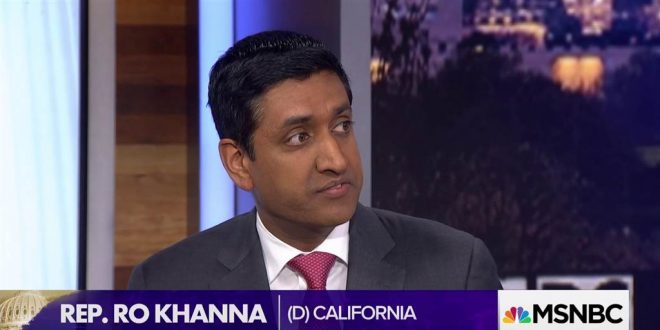 Bruce Ticker February 11, 2021 Guests and Blogs Comments Off on Column: Arab Villages Not “Burning Down” As House Dems May Be Burning Bridges

Didn’t you know? “They can’t be burning down Palestinian villages.”

Rep. Ro Khanna did not know it either, but he uttered those words anyway in an interview last Friday with MSNBC in noting that President Biden would “radically reset” American links with Israel and hold it more to account for its human rights record, The Times of Israel reports.

At best, Khanna did not think it through when he made this statement, which is uncharacteristic for a Yale Law School grad who taught law at two universities, led trade missions for the Obama administration and authored a book on business competition.

Khanna is among a small group of Democratic House members who have distorted the facts when criticizing Israel. It is an ongoing dilemma with Reps. Rashida Tlaib and Ilhan Omar behaving in the most bizarre manner when attacking Israel.

Three weeks ago, some of them accused Israel of withholding vaccines from the Palestinians. They ignored the agreement which requires that Israel and the Palestinian Authority to secure vaccines separately from one another; Israel’s vaccines arrived, but not those for the authority.

Israel also supplied vaccines to Arab citizens of Israel and Palestinians in East Jerusalem, and vaccinated Palestinian inmates in its prisons and many Palestinian health-care workers, according to media reports.

Tlaib was especially obnoxious. She ranted in an interview that the situation proves Israel is “racist” and an “apartheid state.” Other critics were not as brash as Tlaib, and they nonetheless misrepresented the facts.

While these Democrats quieted down, Khanna revived distorted criticisms last Friday when he charged the nation with human rights violations, some of which he was forced to recant.

Biden is “going to make clear that Israel is an ally and always has been an ally,” Khanna said during the interview, as quoted in The Times of Israel, “but they have to recognize Palestinian statehood, and they can’t be having new settlements, they can’t be burning down Palestinian villages.”

It is true that Israel has carried out demolitions of Palestinian villages which Israeli officials say are erected illegally; Palestinians contend that Israel refuses to authorize enough villages as it does for Israeli settlements in the West Bank.

The Philadelphia native ultimately clarified that he was specifically “referring to Israeli settlers who have burned Palestinian orchards and the military which has demolished or bulldozed villages.”

Khanna’s was born in my hometown. His parents moved to Philadelphia from India and worship as Hindus, and he graduated from Council Rock High School in Newtown, Bucks County. That section of Bucks County has evolved as one of the largest Jewish suburbs surrounding Philadelphia. He now represents much of the Silicon Valley south of San Francisco, including Palo Alto and part of San Jose.

He reminded a Times of Israel reporter that he has been supportive of Israel and explained, “I want for our relationship to be grounded on pluralism and human rights. I recognize and appreciate the security concerns of Israel and the violence Israel faces, but believe we must work towards a two-state solution, an end to new settlements, and also a stop to the demolitions.”

It would have been reasonable had he said that in the first place.

Joining Tlaib in alleging Israel’s denial of vaccines to the Palestinians were Reps. Joaquin Castro and Jamaal Bowman. As the Jewish Telegraphic Agency reports, neither was as bombastic as Tlaib, but they still misrepresented the facts.

Castro, who represents western San Antonio, said, “I commend Israel for leading the world on vaccinating its people, but I’m disappointed and concerned by their government’s exclusion of Palestinians living under Israeli occupation from these vaccination efforts, despite making Covid vaccines available to Israeli settlers in the West Bank.”

Bowman, who represents portions of the Bronx and adjoining Westchester County, urged Israeli Prime Minister Benjamin Netanyahu to guarantee that Palestinians are vaccinated and added that “this cruelty is another reminder of why the occupation must end.”

As members of Congress, they should know better to do their homework. Either they did not know or care that Israel was doing some of what they believed it should do, nor did they know or care about the separate health-care responsibilities for Israel and the Palestinian Authority.

This is not to defend Israel. It is fair to criticize Israel if it did not do enough, but they had no business accusing Israel of doing nothing when that was a lie.

Khanna, Castro and Bowman ignored recent history because Israel has done everything possible to end “the occupation.” It was 20 years and seven months ago when Israel proposed an independent state comprising Gaza, East Jerusalem and 93 percent of the West Bank, and then-Palestinian leader Yasser Arafat rejected it. Shouldn’t a member of Congress concerned about this conflict be aware of this background?

Granted, Netanyahu has moved in the other direction with settlement expansion and threatened annexation, but would this be possible without Palestinian intransigence?

To say the least, some attacks on Israel are offensive because it is singled out. We do not hear as often of Palestinian transgressions, which are far worse, or human rights abuses in other countries. Focusing on Israel, especially when criticisms are murky, reeks of anti-Semitism.

These representatives put their credibility at risk. Perhaps their remarks will go largely unnoticed now, but their words could eventually catch up with them. They will likely get re-elected if they hold safe seats, but they may not be taken seriously by the public and lose opportunities for higher positions.

They would also be ignoring their Jewish constituents. Khanna and Bowman both represent large Jewish populations. Even if their numbers are too small to vote them out of office, the Jewish constituents at least deserve to have their viewpoints given fair consideration.

Democrats could have a bigger problem with Jewish voters and those who dislike left-leaning Democrats for other reasons, such as their cries to “defund police” and perceived calls for socialism. They need Jewish support to make social policies a reality. Most Jews are every bit as worried about health care, gun control and education even if they are less affected by these issues, and deeply empathize with those hit hardest by poverty. They want to help.

If anti-Israel Democrats ever take control of the party, what are Jews and other factions to do? Practically speaking, many could move to the Republican side, and that could be a disaster for the Democratic Party. Most sizeable Jewish communities are represented by Democrats in the House, including most of those in New York City and southern California. Many of the congressional districts that flipped in Pennsylvania and New Jersey comprise burgeoning Jewish populations. If Democrats lose their majority in the House, how can they transform their hopes and beliefs into solid policies? Jews want a better society, too, but not on their backs.

Bruce S. Ticker, who writes from Philadelphia, also blogs for The San Diego Jewish World and Smirking Chimp and previously for the suspended Philadelphia Jewish Voice. He was previously a reporter and copy editor for daily newspapers in eastern Pennsylvania.
Previous We Have the Stars
Next Boulder JTree Loves Cal-Wood

Column: Pinning Down Abbas: No Clarity, No Peace

Learn about SIPP’s Mini-Grants and New Directions This Sunday