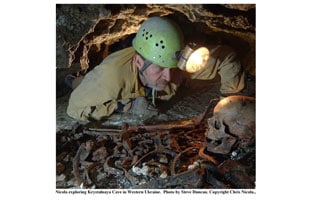 ACE at the Boulder JCC October 7, 2020 Arts & Culture Comments Off on No Place on Earth: An Incredible Story of Strength and Survival

A “Lunch and Learn” with Chris Nicola

World caver and explorer, Chris Nicola, shares the incredible story of how five Jewish families survived the Holocaust by taking refuge in a cave for nearly a year and a half – the longest uninterrupted, underground survival experience on record.

With tremendous determination, Nicola conducted extensive research and was ultimately able to locate several of the survivors. He brought their story to life in both his book, “The Secret of Priest’s Grotto,” and in the documentary film, “No Place on Earth.” This remarkable tale began as a mystery but became an astounding testament of faith, strength, and perseverance.

Chris Nicola lives in New York City where he has held an astoundingly unusual array of jobs: Senior Investigator for the State of New York, bar manager and bouncer, adjunct lecturer, actor, bodyguard, undercover investigator in the NYC schools, and civilian operative for the FBI. Today he spends most of his time caving, being a public speaker, and continuing to research this story, which he first heard about as little more than a rumor in Ukraine, twenty years ago.

You can watch the free trailer and the documentary itself (as a rental, purchase, or through a subscription) on Amazon.

This program is supported by the Lichter family, in memory of George Lichter, who thoroughly enjoyed the Lunch and Learn programs.

The cost of this program is $10 per household. Register here in order to receive the Zoom link that you’ll need in order to attend.