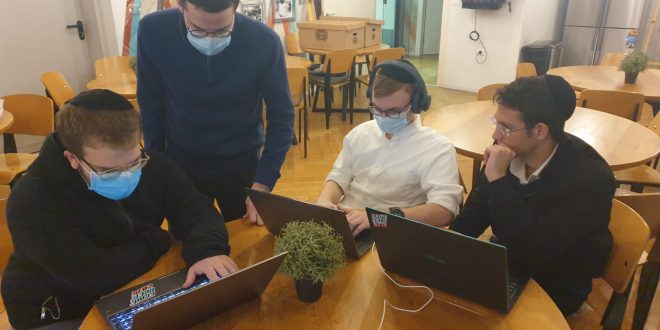 On December 2nd, hundreds of Jewish Orthodox programmers and developers united for the Kama-Tech Covid-19 Hackathon. Their goal: To develop advanced technology and innovative solutions to facilitate the battle against coronavirus and gradual return to normalcy in a world still darkened by a deadly virus that infected close to 65 million people and claimed over 1.5 million lives in the span of one year.

Sponsored by Kama-Tech, a social initiative founded by private developers and community activists in the Jewish Orthodox sector that facilitates the absorption of Orthodox workers into the hi-tech industry, the Hackathon’s goal was to develop innovative solutions to help governments and societies deal with the ongoing crisis.  The Hackathon brought together some of the greatest minds in the Orthodox world, among them senior programmers and developers, who within the 24-hour allotted time frame, proposed and developed a wide variety of pioneering solutions to help the country better deal with current challenges.  Several of the proposed programs drew the interest of international companies and non-profits, most notably Google, Pitango and Poalim Hi-Tech.

The event attracted developers and programmers from around Israel, many unsurprisingly, from Bnei Brak itself, a city with a predominantly Orthodox population, that recorded one of the highest Covid-19 infection rates in the country and endured repeated waves of illness and lockdowns that exacerbated the economic crisis.

The Hackathon, which began Wednesday and ended Thursday, took place in hybrid format and, obviously, with strict adherence to all Ministry of Health guidelines. While a large group assembled in the Ampersand Compound in Bnei Brak, hundreds of others attended virtually on Zoom.  Minister of Science and Corona Cabinet Member Izhar Shay kicked off the event with a rousing welcome and speech that propelled Hackathon participants directly into high gear.

“I’m very excited to be here at this event, launching a Hackathon of male and female Haredi programmers who united to develop innovative solutions to the many challenges that we’re facing in this era,” expressed Shay. “Over 300 people are here today, mostly on Zoom. Once again, Kama-Tech developers are proving how they successfully integrate innovation with love of Israel. The ideas that I’ve seen are all breathtaking and original.”

Throughout twenty-four hours of intensive, mind-blowing work, small teams of programmers focused on one predefined goal that they selected from a list of challenges, among them big data analysis of the virus’ behavior and patterns; technology to reinforce contact with the high-risk population; applications to identify antigen tests; tools to nip chains of infection in the bud in virus hotspots; issuance of biometric ‘Recovered Certificate’ data; and expanded public awareness tools.

In the course of the event, both Prime Minister Benjamin Netanyahu and President Reuven Rivlin were filmed expressing their best wishes to the directors of Kama-Tech and Orthodox techies who joined the event.

“I want to send you my heartfelt blessings on your outstanding initiative to incorporate Orthodox workers into the technology industry. I am thrilled that this sector is integrating so wonderfully into the industry,” said Rivlin.

In a special clip, Minister of Health Yuli Edelstein likewise conveyed his blessings to Hackathon participants. “I congratulate you on this impressive initiative. Coronavirus struck the Orthodox sector hard, and it’s therefore very meaningful that talented people like you are working toward solutions. I promise to listen to your suggestions.”

Hi-tech developer Tehillah Ruben is a Bnei Brak resident who participated in Wednesday’s Hackathon along with friends and colleagues. “Living in Bnei Brak and watching all that ensued up close with vicious cycles of mass outbreaks leading to various stages of lockdowns, we were strongly motivated to seek solutions, and especially to brainstorm for ways to protect people classified as high-risk by significantly reducing the risks of infection,” she explained. Ruben and her team developed an app called Pod-It which allows the user to check his level of risk.

Matti Eckstein and his team developed an application that can read a person’s body temperature, if he is wearing a mask, and identify the number of individuals in a store or hall in order to facilitate adherence to safety regulations. He explains that his participation in the event drew partly from his experiences throughout the past months.

“Corona was a grueling period that affected everyone in different ways. Orthodox Jews in Israel often have large families, and we live a particularly social existence that includes meeting three times a day for prayers, daily study regimens and lectures in synagogues, as well as frequent family gatherings and large weddings and events, faced their own unique set of technical challenges and complications.

“Unfortunately, Covid is not off the map yet, and we have to learn to live with it rather than escape it. The application that we developed facilitates this goal,” he said.

Founder and CEO of Kama-Tech Moshe Friedman shares: “The Orthodox community was one of sectors hardest hit by corona in Israel, mostly due to the density of its cities which boast some of the highest populations and saturations in the country.

“In contrast, the Orthodox community also encompasses fantastic talent, creativity and wisdom. Particularly because we were so deeply affected by the virus, we were determined to recruit our greatest minds to gather and fight this life-threatening illness on the front lines.  I had no doubt that we’d witness incredible results during these 24 hours, and we did.”

The Hackathon culminated with a stirring ceremony attended by a panel of specialists including government officials, medical professionals and senior hi-tech industry officials who announced the event winners:

First place went to Natta Marom and his team who developed a unique application based on a device innovated by Marom’s start-up Next-Dim. His app studies billions of transactions and identifies their correlations in ways that enables rapid identification of any local outbreak of the virus and allows the authorities to clamp it down before it spreads.

Recruiting the cooperation of the Bnei Brak municipality, Marom created a platform to identify contagion patterns and analyze real-life anonymized disease information.  His solution, he explains, will help decision-makers both on a municipal and national level better understand the spread and patterns of contamination; offer insights as to how lockdown measures and limitations to public activities actually affect Covid-19 contagion patterns; increase flexibility and clarity for decision-makers in defining lockdown measures; and provide the public with better and clearer information regarding why the measures taken are necessary. Upon accepting their prize, Next-Dim’s team promptly announced that they will be donating their 5,000 NIS prize money to Ezer Mi’Zion, an Israeli health support organization providing a wide range of medical and social support services for Israel’s sick, disabled and elderly.

Yanky Biderman, Shneur Horowitz and their team came in second for developing ‘Green Card,’ an application for recovered Covid-19 patients that operates similarly to credit cards and magnetic insurance cards and enables them to move freely throughout the country based on antibody levels. Their innovation attracted the attention of Maccabee Health Fund. Third place winners were Tamar Kosovksy and Bruria Azzulai, who developed a device that incorporates artificial intelligence and enables early identification of risk among adolescents.

At the close of the event, Friedman concluded, “I’m overjoyed that Kama-Tech, which spearheads the effort to integrate Orthodox men and women into the field of hi-tech throughout the year, was able to join forces with other technology companies, health funds and the Israeli government to recruit hundreds of programmers who developed 27 outstanding solutions to aid the battle to fight corona. The Minister of Health, Israeli hospitals and health funds have all shared that they’re open to our suggestions, and some are already assessing how to integrate the applications that we’ve developed into the national effort.”

Chairman of the Knesset Yariv Levin was effusive in his praise of Kama-Tech and Hackathon participants. “This event is another symbol of the Orthodox sector’s contribution to the State of Israel. The combined efforts of so many are invaluable.”

They call me "NewsHound IV," because I'm a clever Finnegan, sniffing out stories all over the Boulder area. I love Jewish holidays because the food is GREAT, especially the brisket. Well all the food. I was a rescue pup and glad to be on the scent!
Previous JFS Boulder Distributes Chanukah Bags to Older Adult Communities
Next Spend Christmas with an Exclusive Presentation of “Crossing Delancey”