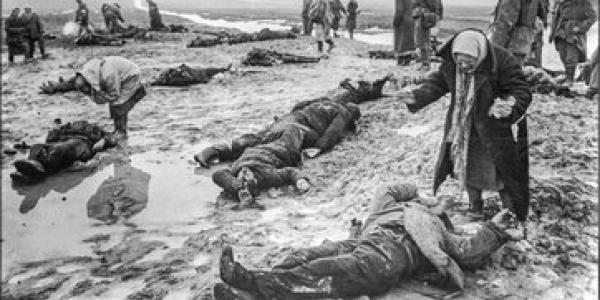 Linda Park August 5, 2020 Events Comments Off on Grief: The Biography of a Holocaust Photograph – A Conversation with Professor David Shneer

In January 1942, Soviet press photographers came upon a scene like none they had ever documented. That day, they took pictures of the first liberation of a site of a German mass atrocity: a location where an estimated 7,000 Jews and others had been executed at an anti-tank trench near Kerch on the Crimean peninsula. Dmitri Baltermants, a photojournalist working for the Soviet newspaper Izvestiia, took photos that day that would have a long life in shaping the image of Nazi genocide in and against the Soviet Union. Presenting never-before-seen photographs, Professor David Shneer will discuss his newly published book, “Grief: The Biography of a Holocaust Photograph” (Oxford, 2020), and show how Baltermants used the image of a grieving woman to render this gruesome mass atrocity into a transcendentally human tragedy.

Events are free of charge and open to participants in all locations, within Colorado and beyond.

Professor Shneer received his Ph.D. from the University of California, Berkeley in 2001. His first book, “Yiddish and the Creation of Soviet Jewish Culture” (Cambridge, 2005) was named a finalist for the National Jewish Book Award. His second book, “Through Soviet Jewish Eyes: Photography, War, and the Holocaust“(Rutgers, 2011)—about how Soviet Jewish photographers documented the earliest stages of the Holocaust—won the 2013 Jordan Schnitzer Prize from the Association for Jewish Studies. Shneer’s newly published third book called “Grief: The Biography of a Holocaust Photograph” (Oxford, 2020) explores the history of a single image from the moment the Soviet photographer encountered the first liberated Holocaust killing site in January 1942 in the southern Russian city of Kerch.

Previous What Serendipity (and Black and Jewish Culture) May Teach Us About Slavery as a Mindset
Next Weekly Edition: August 7th, 2020