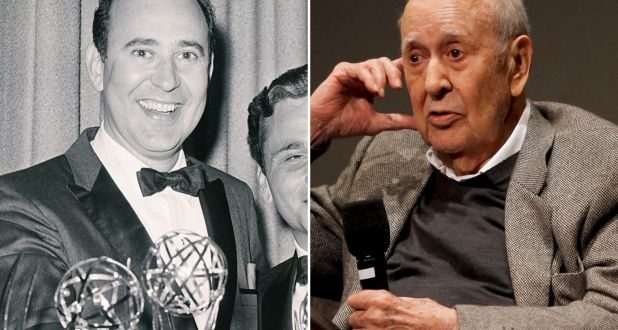 A few days prior to his death of natural causes on Sunday at the age of 98, Reiner tweeted: “Nothing pleases me more than knowing that I have lived the best life possible by having met & marrying the gifted Estelle (Stella) Lebost—who partnered with me in bringing Rob, Annie & Lucas Reiner into to this needy & evolving world.”

The last of a nearly extinct breed of Borsht Belt comic geniuses who once ruled the American comedy universe, Carl Reiner brought this distinctly Jewish style of humor to film and television as a director, comedian, screenwriter, actor, producer, and singer. When Mel Brooks, Reiner’s lifelong compatriot in comedy and cherished companion, leaves us laughing, this cherished era will draw to a close.

Join Kathryn Bernheimer for an appreciation of Carl Reiner featuring clips and commentary highlighting his enormous contribution to popular culture.

A mensch as well as a master of mirth, Reiner was beloved as well as respected, and leaves a rich legacy of friendship, family, and fall-down funny work.

Kathryn has spent her professional life writing about, teaching, and presenting the arts. Founding Director of the Boulder Jewish Film Festival, Kathryn was Director of Menorah and ACE at the Boulder JCC from 2003 through August, 2019. The former film and theater critic for the Boulder Daily Camera, Kathryn is the author of "The Fifty Greatest Jewish Movies" and "The Fifty Funniest Films of All Time." kathryn.bernheimer@gmail.com
Previous Virtual Docent-Led Art Tour: Meet the Darling Madame d’Ora
Next Boulder JCC Updates Us for Summer