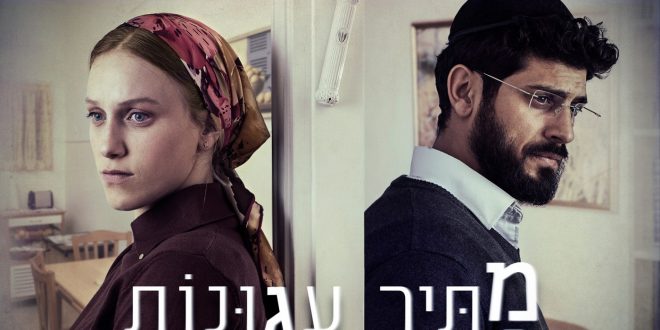 Could “Unchained” be the next “Shtisl” or “Unorthodox?” Find out by watching this award-winning new Israeli TV series set in the insular Haredi community. This special Boulder JCC presentation, offered for the month of August, includes a link to all episodes in the first season, and a panel discussion on Monday, August 31 at 5:00 pm.

“Unchained” is a fascinating detective drama and a quirky personal story of love and identity that tells multiple tales each episode. Its title refers to so-called chained women – agunah – whose husbands refuse to give them the religious divorce, or gett, that would allow them to move on with their lives.

Yossef (Aviv Alush, “Beauty and the Baker,” “Women’s Balcony”) is a devout but volatile rabbi working for Israel’s Rabbinic Court whose unconventional methods to help free women display a touch of obsession. At home, he faces a mystery in the person of his enigmatic wife Hannah (Avigail Kovary, “Red Cow”).

He struggles to save his own marriage just as he frees women from a cruel bondage.

“Smart and wondrous direction of an intelligent script.”  (Haaretz)

“Unchained” is not available through the usual streaming channels but the producers have made the series available for our community for a 20% discount using THIS LINK. You have the whole month of August to binge watch this show and then join us for a panel discussion with several guest speakers, moderated by Boulder Jewish Film Festival Founding Director, Kathryn Bernheimer.

Kathryn has spent her professional life writing about, teaching, and presenting the arts. Founding Director of the Boulder Jewish Film Festival, Kathryn was Director of Menorah and ACE at the Boulder JCC from 2003 through August, 2019. The former film and theater critic for the Boulder Daily Camera, Kathryn is the author of "The Fifty Greatest Jewish Movies" and "The Fifty Funniest Films of All Time." kathryn.bernheimer@gmail.com
Previous Tisha B’Av to Tu B’Av – Reconnect and Share Values
Next Ayla Flaxman Bar Mitzvah